Ryan Williams surges ahead at TOUR Championship of Canada 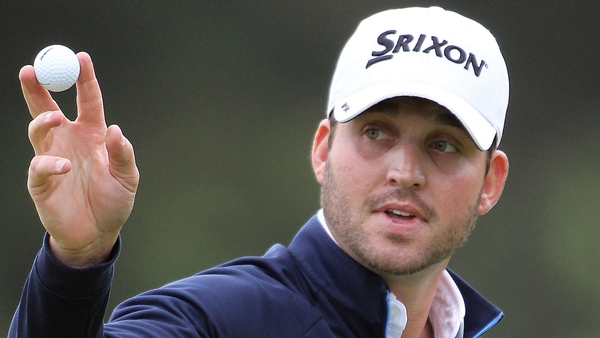 LONDON, Ont. – Vancouver’s Ryan Williams carded a 7-under 65 on Friday at Sunningdale Golf & Country Club to take a one stroke lead through 36 holes at the TOUR Championship of Canada presented by Freedom 55 Financial.

The 33-year old was bogey-free on Sunday, matching his low round of the season to reach 10-under through two rounds, one clear of Kalamazoo, Michigan’s Erik Barnes and two clear of playing partner and travelling companion Adam Cornelson. With one event to go to make the most of his 2014 season, Williams said he was firing on all cylinders this week in London.

“I worked a little harder this week than I think I have in the previous weeks,” said Williams. “The game’s clicking right now, but you know, it’s only two days and I’ve put myself in a good position for the weekend. It should be fun.”

Williams comes to Sunningdale with two top-10s and four top-25 finishes on the year, but seven missed cuts, including four by a single shot. The seven-year PGA TOUR Canada veteran said the frustration got to him at times this season, but that he knew he was on the verge of playing well with one week to go.

“This TOUR is so good and so competitive and the cuts are so low, you can play well and miss a cut,” said Williams. “It’s hard to get down on yourself about it, but you gotta keep going with the flow. I think this week took a lot of pressure off me that I didn’t have to feel like I was grinding another cut out here and I could go play four days.”

Barnes, who shared the first round lead with Matt Marshall, birdied three of his final four holes to get within one of Williams and get in Saturday’s final pairing.

“I just stuffed it, honestly, on three of the last four holes,” said Barnes. “I had a three-footer and a four-footer on the last two holes for birdies, and hit it on in two on 15 and two-putted. It was a good finish.”

Langley, British Columbia’s Cornelson, who was also bogey-free with a 67 on Friday, was one shot further behind at 8-under, while Iowa’s Nate McCoy, Minnesota’s Clayton Rask and Oregon’s Matt Marshall were within three at 7-under.

FRIENDLY PAIRING YIELDS LOW SCORES FOR WILLIAMS AND CORNELSON
Adam Cornelson and Ryan Williams share much in common. For example, they’re both PGA TOUR Canada regulars from the Vancouver area who will room together on road trips; they’re staying with London-based golf writer Robert Thompson this week; and they played together on Friday in the day’s third-to-last pairing.

That, and they’ve been lights-out through 36 holes at the TOUR Championship of Canada.

“We play so much golf together, with practice rounds and back home on the Vancouver Golf Tour being paired together a lot. It was comfortable pairing,” said Williams. “I think we both were excited. Last time we were paired together was back in the day when it was called the Canadian Tour.”

The friendship between the two is one that comes from sharing the experience of the ups-and-downs on PGA TOUR Canada, with each one often caddying for the other in the event of a missed cut. At a combined 18-under through 36 holes, great golf is just another thing they have in common this week.

“Playing with Ryan, we room together and it took a bit of the stress out of the situation for sure. He’s a good friend of mine and I was excited when I saw the pairing,” said Cornelson. “It was fun to talk about different stuff than golf, and watching him play well really helped me too.”

EASON LOOKING TO PUT CHASE FOR NO. 5 AWAY
At No. 5 on the Order of Merit, PGA TOUR Canada rookie Greg Eason has a target on the back as the bubble boy to earn Web.com Tour status for next season. With rounds of 70 and 68 heading into the weekend, the 22-year old is close to taking any drama out of the equation as the field looks to chase him down.

“I’ve obviously been thinking about that, but I’m trying not to. Hopefully I can just put it out of my mind for two more days,” said Eason, who sat tied for seventh position at 6-under par. “I’ve played some nice golf so far. I’m really pleased with the start. Yesterday wasn’t easy at all, and I’m in a good position for the weekend.”

Eason was an NCAA All-American this past Spring with the University of Central Florida, and despite not having a win – the only player in the top eight on the Order of Merit without one – has had a whale of a rookie year, with three top five finishes and seven top-25 results.

“It’s been nice to have that parking spot this week,” said Eason, referring to a reserved spot with his name and Order of Merit position on it. “If I can just take care of things internally, then externally they’ll sort themselves out. I feel like I’ve played nicely. I’ve not really done anything crazy bad yet. I think I’ve played pretty solid, so hopefully that continues.”