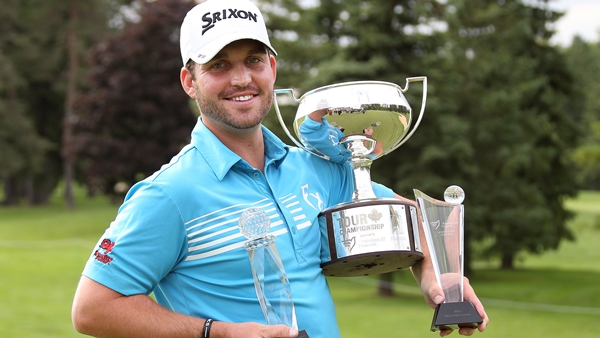 LONDON, Ont. – After the TOUR Championship of Canada presented by Freedom 55 Financial was captured by Vancouver’s Ryan Williams, Joel Dahmen wrapped up PGA TOUR Canada Player of the Year honours at the 2014 season’s final event. The 26-year old Dahmen, who led the Order of Merit wire-to-wire and finished the season with $80,992 in earnings, is one of five players who earned status on the Web.com Tour in 2015.

Dahmen, who won two of the first three events on PGA TOUR Canada this season at the PC Financial Open and the Syncrude Boreal Open presented by AECON, finished $20,873 ahead of No. 2 Matt Harmon and will be fully exempt on the Web.com Tour next season.

“It’s a goal at the beginning of the year but you have to take it one tournament at a time and then set some goals along the way. To finally accomplish it feels great,” said Dahmen. “To win two right off the bat – I had a bullseye on my back for a long time. I had a huge lead most of the year. I had a good finish, second in Calgary, I finished second right after the RBC Canadian Open – and that set me apart. So I had to refocus a few times and gather things. It’s a big relief right now.”

Williams, a 33-year old in his sixth season on PGA TOUR Canada, carded a final round 68 to reach 14-under par and win by one over fellow British Columbian and travelling roommate Adam Cornelson along with Minnesotan Clayton Rask. The win moves him to No. 6 on the Order of Merit, earning an exemption into the final stage of Web.com Tour Q-School.

“I wish there were more tournaments left on this tour,” said Williams. “A lot of hard work, I’ve been out on this tour for six or seven years, my best finish was last year, second place. I had a putt to force a playoff on the last hole (at the Cape Breton Celtic Classic) and thankfully, I had a putt today to win a tournament. A lot of hard work and a lot of people to thank, but this is very rewarding to me.

Williams began the day two shots off Rask’s 54 hole lead, and after a turning in even par on the front nine, turned on the jets with four birdies coming in. After Cornelson, playing in the group ahead, made bogey following a wayward drive, and Rask couldn’t convert a par putt after missing the green long, Williams needed just a two-putt from 35 feet to secure his first PGA TOUR Canada victory.

“I was a little in shock. I had to ask my caddie Rob if that was the winning putt,” admitted Williams.  “I was trying not to get ahead of myself too much. I was just trying to make the putt and see what happened from there. I knew where I stood, I was just trying to take the pressure off myself.”

“It’s been a tremendous season with an incredibly high level of play,” said PGA TOUR Canada President Jeff Monday. “We can’t wait to see these players move on to the next level and make an impact there as they continue their journey to the PGA TOUR.”

Players 6-10 earn spots into Final Stage
In addition to The Five earning status on the Web.com Tour, players finishing 6-10 on the Order of Merit earn an exemption into the final stage of Web.com Tour Q-School, led by Williams in the No. 6 spot. Following Williams were No. 7 Nate McCoy of West Des Moines, Iowa, No. 8 Josh Persons of Fargo, North Dakota, No. 9 Wes Homan of Cincinnati, Ohio and No. 10 Mark Silvers of Savannah, Georgia.

Players finishing 11-20 earn an exemption into the second stage of Web.com Tour Q-School.

In addition to his win, Ryan Williams finished as the highest Canadian on the Order of Merit and was named Freedom 55 Financial Canadian Player of the Year, earning a $10,000 prize. Williams was also recognized as Player of the Week and earned a $1,500 prize.

Eighteen schools across London and Southwestern Ontario were adopted into the Golf in Schools program in honour of the season-ending event on PGA TOUR Canada. The program introduces elementary and high school students to the game of golf through their physical education program at the school.  Click here for the full story.