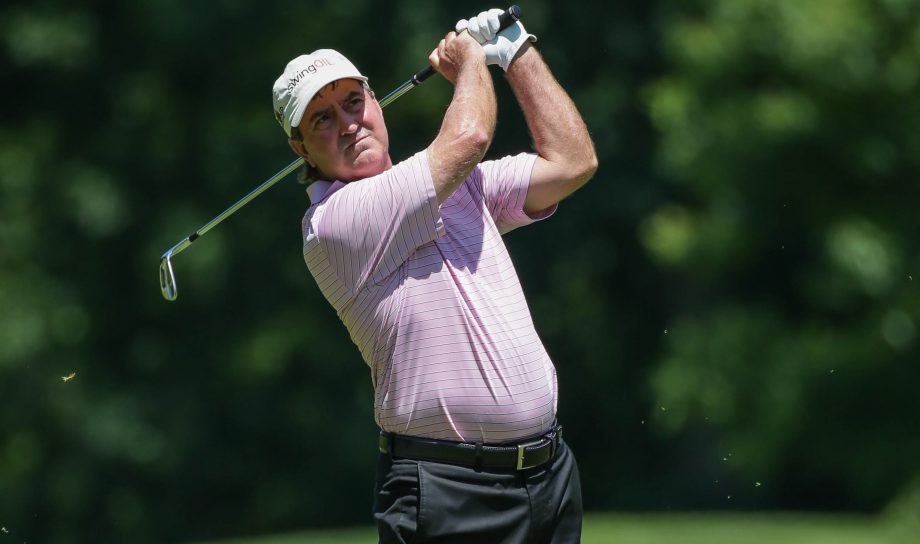 The 53-year-old Sauers matched Toledo with a 9-under 63 in front of large galleries at University Ridge. Sauers withdrew from the Constellation Senior Players Championship two weeks ago in Pennsylvania because of the disk problem.

“I had to go home, see my doctor, and I didn’t play for like seven, eight days,” Sauers said. “Of course, we had the week off prior, which was great, which helped me. And saw my teacher at home, he got me kind of straightened out. Coming here this week I had a lot of good thoughts coming into this week. … Hopefully, I can make it the next few more days.”

Sauers closed his bogey-free round with a birdie on the par-5 ninth.

“It’s a great golf course,” Sauers said. “The front side is kind of wide open and then the back nine is tree-lined, so it’s a good mixture. The golf course is in great shape. The greens are perfect. What more can you ask for? You know, shooting 9 under is pretty good out here on this track. It’s not a real easy golf course. You’ve got to just concentrate on fairways and greens and give yourself opportunities.”

The three-time PGA Tour winner has successfully fought the rare skin condition Stevens-Johnson syndrome to continue his career. He has four runner-up finishes in 81 career starts on the 50-and-over tour.

Toledo made five straight birdies on his first nine, added three more on Nos. 1, 2 and 4 and capped his bogey-free round with another on the ninth. The 53-year-old Mexican player won the Allianz Championship in February for his fourth senior title.

Fran Quin was a stroke back, making six birdies in an eight-hole stretch that ended on the par-5 16th. The 51-year-old Quin has finished in the top 25 in all three of his tour starts this year.

Large crowds followed the players in event that hometown PGA Tour player Steve Stricker helped launch and hosts. He turns 50 in February and will be eligible to play next year.

“We can’t ask for anything more,” Sutherland said. “There was a lot of people out there today. It was amazing to see everybody out here. I think it says a locality about Steve Stricker, about the way people feel about him around here, and they should. He’s a tremendous human being, he’s obviously a great golfer. So this says a lot about Steve, says a lot about Madison. It’s been fantastic.”

Bernhard Langer topped the group at 67. The 58-year-old German star is coming off a victory two weeks ago in the Constellation Senior Players Championship, his second major win of the year. He has three overall victories this year to push his senior total to 28.

“I just didn’t make any putts on the back nine,” Langer said. “Played pretty good, but the greens were a bit on the slow side, so I left a couple short and didn’t get it close enough. But overall it’s a solid round. I’m right there. Got two days to catch up.”

John Daly opened with a 71, also finishing with a birdie on No. 9. He’s making his sixth tour start since turning 50 in late April.