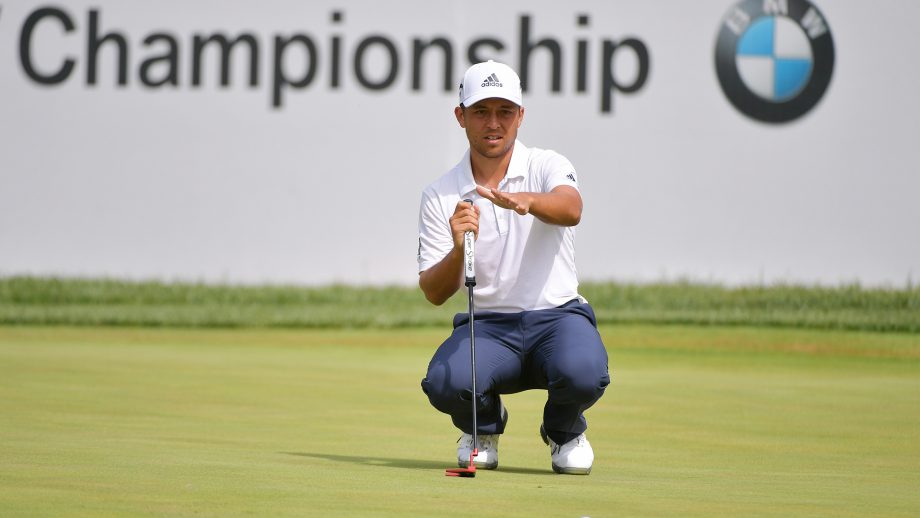 NEWTOWN SQUARE, Pa. – Ryder Cup captain Jim Furyk had an easy time deciding on three of his four picks for the Ryder Cup.

Xander Schauffele is making the last one a little more difficult.

Schauffele nearly holed a wedge on his second hole, rolled in a 40-foot birdie putt in the middle of his round Friday and wound up with a 6-under 64 in the BMW Championship for the lowest 36-hole score of his career and a two-shot lead over Justin Rose.

“I’m sort of in a position where I feel like a win is the only way I’d even be in consideration,” Schauffele said.

He also made it more difficult on Woods, who again goes into a weekend have to catch up to the leaders.

One day after he opened with a 62 – his lowest score since his last victory more than five years ago – Woods went eight holes before his first birdie and didn’t make many after that. He finished with two straight bogeys for a 70 that left him five shots behind in a tie for 12th.

“Very simple. I didn’t make any putts,” Woods said. “I hit a lot of beautiful putts that were on the top of the edge, and then obviously hit a couple bad ones on the last hole, but looked like all the putts were going to in. But they didn’t go in today.”

Schauffele was at 13-under 127 and will be paired in the third round Saturday with a familiar figure in Philadelphia. Rose, who played bogey-free for a 64, won the AT&T National at Aronimink in 2010, and he captured his only major at nearby Merion in the 2013 U.S. Open.

“Cheese steaks, I guess,” Rose said. “I played well. The crowd latched onto it, for sure. I get good support around here. It’s nice when they’re reminding you all the time that it’s your town, as well. It’s nice to have the added bit of enthusiasm from the crowd.”

Aronimink was even softer than the opening round from a burst of rain overnight. Starting times were moved up four hours because of a forecast for more rain. The trick Friday, when the average score was 67.33, was to avoid wedges that spun too much to back pin positions.

Hideki Matsuyama, who started the FedEx Cup playoffs at No. 76, had a 64 and was in a group three shots behind that included Keegan Bradley, Alex Noren and Rickie Fowler. Matsuyama suddenly is in position to be among the 30 players who advance to East Lake in Atlanta in two weeks for the Tour Championship.

The same is true for Bradley and for Noren, the Swede who makes his Ryder Cup debut at the end of the month. Noren holed out for eagle on the par-5 ninth for a 66, while Bradley keeps flirting with contention in these playoff events.

Schauffele also needs a good week to get to East Lake, though he would like to extend his season an additional week in France at the Ryder Cup.

A runner-up at the British Open, the 24-year-old from San Diego finished 12th in the Ryder Cup standings. Furyk used three of his picks Tuesday night on Bryson DeChambeau, Phil Mickelson and Woods – Nos. 9, 10, 11 in the standings – and has one more pick after the BMW Championship.

Tony Finau is regarded the leading candidate, and he did nothing to hurt his chances. Finau made seven birdies in his round of 64 and goes into the final 36 holes at Aronimink just five shots behind.

“The possibilities are cool, the potential of what could happen,” Finau said. “But nothing good comes from thinking too far ahead. I got a couple rounds in front of me, 36 holes to try and win this tournament. And winning takes care of everything.”

Woods once used that phrase – “winning takes care of everything” – when he returned to No. 1 in the world after his injuries in 2013. Winning remains elusive, a cold putter didn’t do too much damage after starting with a 62.

He missed a 4-foot par putt on the par-3 fifth hole and didn’t convert any of the birdie putts from the 20-foot range. What he made on Thursday, he missed on Friday.

Schauffele said he was on a mission, and the Ryder Cup was merely a byproduct. He was the PGA Tour rookie of the year last season after winning the Tour Championship for his second PGA Tour title. Now, results are harder to find.

“Just prove to myself that I can win again and just be clutch,” he said. “I always thought I was rather a clutch player coming down the stretch and this year has said otherwise. I’m trying to prove it to myself again.”