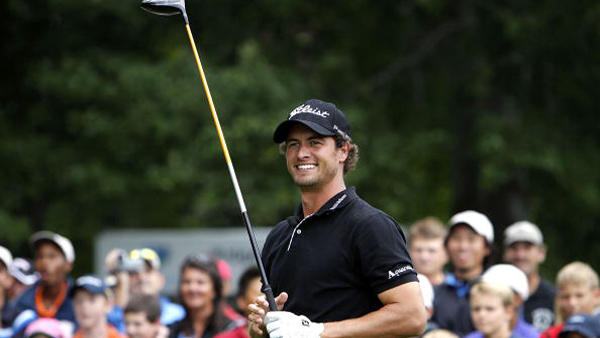 FORT WORTH, Texas – Adam Scott made a 7-foot birdie putt on the third hole of a playoff Sunday to end his first week as the world’s No. 1 player with a victory at Colonial.

Jason Dufner, who made a 25-foot birdie putt on No. 18 in regulation, slid a 40-footer past when he and Scott played the 18th hole for the second time during the playoff. Scott then made the 7-footer for his 11th PGA Tour victory.

The major champions parred No. 18 to start the playoff, then matched birdies at the 17th hole. Dufner, who won the PGA Championship last year, hit his approach pin high on 17 to 4 1/2 feet, but 2013 Masters champ Scott drained a 14-foot birdie before Dufner putted.

Dufner and Scott both shot 4-under 66 to finish at 9 under, the highest winning score at Colonial since 1999.

Scott replaced the injured Tiger Woods at the top of the ranking last Monday and will stay No. 1. Scott had to be in the top 13 at Colonial after Henrik Stenson finished in a five-way tie for seventh place in the BMW PGA Championship at Wentworth.

The win at Hogan’s Alley, which comes with $1,152,000 and a plaid jacket, made Scott the first player to win all four PGA Tour events in Texas. He is the 15th to win both the Byron Nelson Championship (2008) and the Colonial in the Dallas-Fort Worth area.

The 11th playoff in Colonial history was the first since 2009, and the longest since Jim Colbert beat Fuzzy Zoeller on the sixth extra hole in 1983.

Nicholas Thompson and Freddie Jacobson tied for third at 8 under. Thompson shot 66, a stroke better than Jacobson.

David Toms, in the final group, led at 9 under when he made his turn. But he had three bogeys over the next five holes and finished with a 70.

Toms ended up at 7 under with Brendon Todd (68), who last week got his first PGA Tour victory at the Nelson.

Jimmy Walker, No. 1 in the FedEx Cup standings, shot a 70 and was among four players tied for 10th at 6 under.

About 30 minutes after Dufner made his long birdie at No. 18 to get to 9 under, Scott made a closing par when his 31-foot birdie chance – which would have wrapped up the victory – slid just past the hole. It was just less than an hour later when the two went back to No. 18 to start the playoff.

At the same time Scott was finishing, Toms was coming off a bogey at the par-3 13th that dropped him two strokes back.

Scott and Dufner started the final round part of a seven-way tie for 11th place, only two strokes behind a quartet of leaders that included Toms.

They were among 33 players within four strokes of the leaders when the day began.

Scott was 8 under after making a 6-footer at the 406-yard No. 6 hole, his fourth birdie in the round and already with a bogey at the par-4 third when he three-putted from 24 feet.

His only other three-putt at Colonial came from 17 feet at the ninth hole, dropping him to 6 under and three strokes behind Dufner.

But Dufner gave up a stroke when he missed a par putt from less than 3 feet at the straight 615-yard 11th hole. When his 12-foot birdie chance at the 440-yard 12th hole slid a half-foot past the cup, Dufner stood momentarily and stared at the ball before tapping in his par.

Scott caught up with consecutive birdies on those same holes, pitching to 9 feet at No. 11 before his approach at No. 12 to 4 feet.

Dufner had another near miss at No. 15, where another lengthy birdie chance slid inches by the hole.

Graham DeLaet shoot a 68 to end the tournament in a tie for 14th, while David Hearn shoot a 66 to finish tied for 21st.