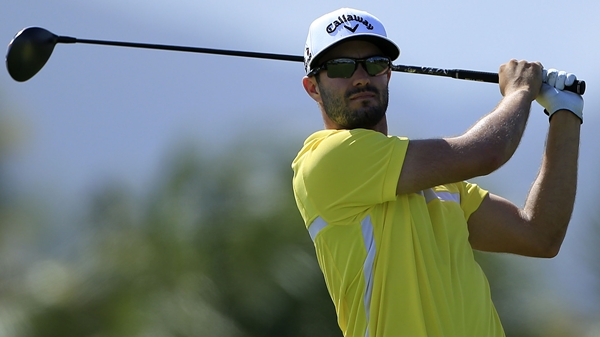 RIO GRANDE, Puerto Rico – Scott Brown birdied the final two holes Saturday for a 5-under 67 and a share of the lead with Chris Smith in the PGA Tour’s wind-swept Puerto Rico Open.

Brown, the 2013 winner, matched Smith at 6-under 2010 at Trump International-Puerto Rico.

“Got a few more putts to go in today and ended up shooting a good round,” Brown said. “The wind died just a little bit for us this afternoon. Putting has been tough early in the week with the wind blowing as hard as it’s been. It’s still blowing around a little bit, tough to get it close.”

Brown also had three front-nine birdies in his bogey-free round.

“The toughest thing about this course is it’s all cross-winds, so you very rarely get any downwind or into-the-wind shots,” Brown said. “It’s all quarter in or across. That’s what makes it so tough. It’s really just guesswork. It’s guessing on how much you think it’s going to move it. The wind has been so strong that you can’t really play shots that hold up against it. You’ve just kind of got to let the wind do what it does.”

“I’m starting to get comfortable playing golf again, which is nice, and it’s fun,” Smith said. “All three days have been fun. I’m just trying to keep taking steps. I feel like I’m taking steps.”

“It’s one of the only weeks of the year that I know I’m going to get in, so I can kind of mentally prepare for playing for it,” Smith said. “When I get here, it’s not like getting in Tuesday night and then trying to hustle to the tournament and then playing.”

Jon Curran and Argentina’s Emiliano Grillo were a stroke back. Curran had a 70, and Grillo shot 72.

Second-round leader Alex Cejka dropped four strokes on the final four holes to fall into a tie for fifth at 4 under. He finished with a 75, making bogeys on the par-5 15th and par-4 17th and a double bogey on the par-5 18th.

Stephen Ames carded a 2-over 74 Saturday and dropped 23 spots into a tie for 54th.