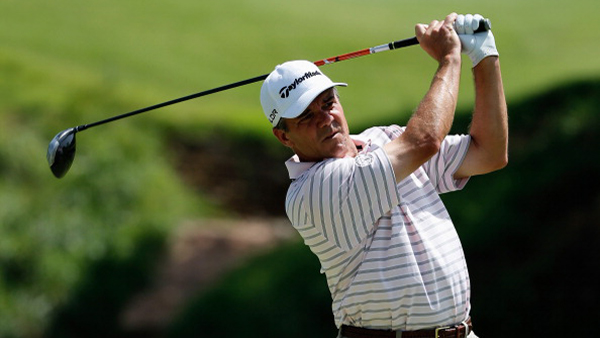 SNOQUALMIE, Wash. – Scott Dunlap leads the Boeing Classic after his second-round 9-under 63 Saturday.

Dunlap, in his first full season on the Champions Tour, birdied five of his final seven holes for a two-day 12-under 132 at the TPC Snoqualmie Ridge course.

Tommy Armour III and Mark Brooks are tied for third at 9-under 135.

Fred Funk, Woody Austin and Joe Durant are tied at 8-under 136, four behind the leader.

Six of the top seven players are seeking their first Champions Tour victory.

Dunlap has never led entering the final round in the PGA Tour, the Web.com Tour or the Champions Tour.

Asked if he can hang on to win Sunday, Dunlap said, “I know I can. It’s will I? For the past couple months, I’ve been playing better every week.”

In his 16th start on this Tour, Dunlap got his round going with an eagle 2 on the par-4 fourth hole. His 150-yard approach hit 30 yards to the left of the hole then found its way into the cup.

“We couldn’t see it from where we were,” Dunlap said. “It was a good sensible shot, but didn’t think I holed it. Good bumper-pool on that one.”

He saved par on the 10th and 11th, then started a three-hole birdie run. He finished with a 45-foot eagle putt on 18, just missing to the right for a seven-birdie bogey-free round.

Dunlap played seven seasons on the PGA Tour in three separate stints. He did not play on the PGA Tour from 2002 until he regained his card in 2012. During that time he toured the world.

“I’ve been to some places that you’d have absolutely no reason to go to if wasn’t for playing a golf tournament,” he said. “I think you mature much quicker than what you would otherwise.

“The globe-trotting is out of necessity. One, I needed to make a dollar. And, two, I don’t look back at any of that and think of disappointment. It’s been great.”

Garwood had a chance to tie Dunlap on the par-5 18th. His two-iron approach hit the pin and caromed 15 feet away. He missed his eagle putt, but earned his seventh birdie – against one bogey.

The closest Garwood has come to victory in his two seasons on the Champions Tour was in June when he lost in a playoff to Tom Pernice Jr. at the Principal Charity Classic.

Garwood said he gave up the game for most of the 1990s, working different jobs in the Los Angeles area. He returned to the game to qualify for the 1990 U.S. Open and has played since.

His father, Kelton Garwood, played a number of supporting roles in TV series during the 1950s and 1960s. His most prominent role was the undertaker on the TV series “Gunsmoke.”

“I take after my dad a lot,” Garwood added. “This is like my stage. When I’m out there, I’m acting like a professional golfer.”

Michael Allen began his round with a flourish, knocking in five straight birdies and briefly held the lead at 9 under. But he opened the back nine with a double bogey and faded to 7-under 137, five shots behind.

First-round leader Mike Goodes, an amateur player until he joined the Champions Tour in 2007, faded with a 3-over 75 and was tied for 16th place.

Two of the Tour’s most successful players, Fred Couples and Bernhard Langer, both struggled. Couples, the most popular player here playing in his hometown, was at 2-under 142. Langer, who had won three of the past five tournaments, was at 3-under 141.

Rod Spittle shot 69 for a share of 20th at the end of the second round.