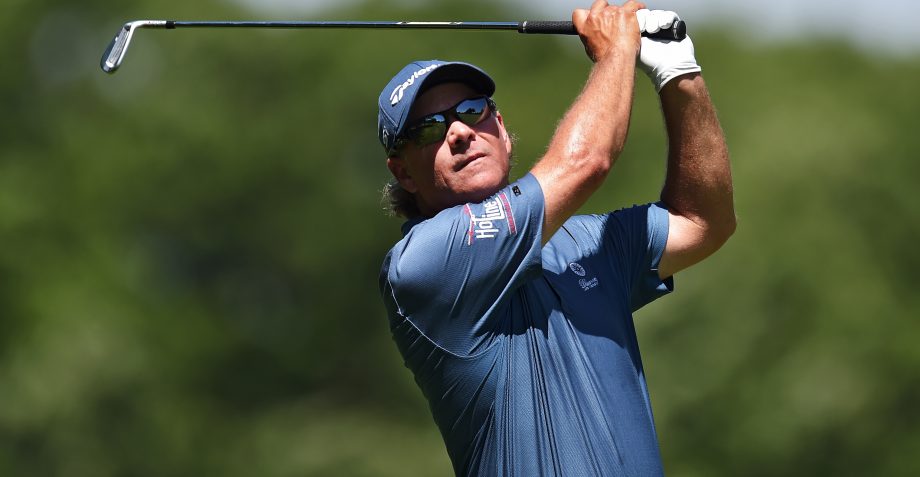 VICTORIA – Scott McCarron eagled the par-5 12th and shot a 5-under 66 on Saturday to take a two-stroke lead in the Pacific Links Bear Mountain Championship.

The 51-year-old McCarron made an 8-foot putt for the eagle and added a birdie on the par-3 16th in chilly, overcast conditions at scenic Bear Mountain Resort, the first-year venue in the PGA Tour Champions event that was played in Hawaii from 2012-14.

McCarron had a 14-under 128 total after shooting a course-record 62 on Friday. The three-time PGA Tour winner won the Principal Charity Classic in June in Iowa for his first senior victory.

Doug Garwood was second after a 66. Winless on the 50-and-over tour, Garwood played the front nine in 6-under 20, birdieing the first three holes and the last three. He lost the lead with a bogey and McCarron’s eagle on 12, had a double bogey on the par-3 14th and birdies 17 and 18.

Colin Montgomerie was 11 under. The Scot birdied the final two holes for a bogey-free 67

Scott Dunlop birdied the last two holes for a 65 to reach 10 under, and Jeff Maggert, Mark O’Meara and Brian Henninger each shot 64 to join Olin Browne (67) and Jeff Sluman (68) at 9 under.

Vijay Singh was 6 under after a 69. He bogeyed three of the last five holes.

Fellow Hall of Famer Bernhard Langer bogeyed the last for a 68 that left him 10 strokes back at 4 under. The 59-year-old German star leads the tour with four victories this season.

Jim Rutledge topped the four Canadians in field, shooting a 69 to move into a tie for 51st at even par. Stephen Ames was 1 over after a 69.