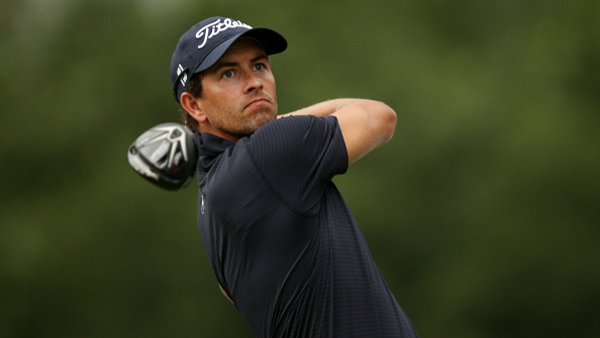 PARAMUS, N.J.  – Now that the majors are over, Adam Scott is going after the only big prize left this year – a shot at the $10 million FedEx Cup title.

Scott ran off four straight birdies in the middle of his round Friday, and then closed with an approach that settled a foot from the cup for a tap-in birdie and a 6-under 65. That gave him a share of the 36-hole lead with Cameron Tringale at The Barclays.

Three dozen players were within five shots of the lead, a group that includes British Open and PGA champion Rory McIlroy. The world’s No. 1 player, going after his fourth straight victory, shook off some rust on the range and was nine shots better than his opening round with a 65.

Scott won The Barclays a year ago at Liberty National, and it felt like a bonus in a year in which he won his first major at the Masters. He never had a serious chance at any of the majors this year, and he is looking at the FedEx Cup playoffs differently.

“There’s so much to play for, and for me to be satisfied with the year, I need four really great weeks,” Scott said.

Scott and Tringale were at 8-under 134. Kevin Chappell (67), Brendon Todd (69) and Jim Furyk (69) were one shot behind. The group two shots back included Henrik Stenson (64), Jason Day (64) and Ernie Els, who is playing his sixth straight tournament and shot a 68.

Lefty took a bogey on the “five-and-dime” fifth hole, thusly named because Byron Nelson always used a 5-iron and a wedge. Mickelson, like so many other players, tried to drive the green and took a wild detour. His shot bounced into the grandstand, behind a row of seats on the thin carpet of the hospitality area. Instead of dropping into deep grass, he chose to play it out of the bleachers, right next to a half-filled glass of beer on a table.

It went too long, over the green and into a bunker, though it gave the crowd a thrill.

“It wasn’t hard to make contact. It was hard to hit it on that skinny little green and get it to stop,” Mickelson said.

He compared it with trying to hit a shot off the cart path, except the carpet “doesn’t scrape up your club as much.”

Mickelson birdied his last hole for a 72 to make the cut on the number.

Seung-yul Noh made a bogey by playing off the wrong green – except it turned into a triple bogey because he didn’t know that he wasn’t allowed to hit off the putting surface from a different hole. His tee shot on No. 11 was so far right that it landed on the third green. Noh took a divot off the green, and a rules official drove up and told him the rule, which comes with a two-shot penalty.

McIlroy kept his excitement to birdies. The 25-year-old from Northern Ireland said he took a week away from golf to celebrate his big summer – two majors and his first World Golf Championship – and paid for it with an opening 74. But the range session Thursday afternoon did wonders, and he went from below the cut line to within five shots of the lead.

He also made those “Freaky Friday” rounds that ruined so many tournaments a distant memory.

“It’s a very bunched leaderboard,” McIlroy said. “I’m still five shots behind, but there’s a lot of players between me and the leaders – obviously, a few quality guys at the top, Adam being one of them. So I’m going to have to shoot a couple of rounds similar to today to maybe win this thing.”

Scott was so clean from tee-to-green that he shot 65 and walked away lamenting a pedestrian effort with his putter. He missed six putts inside 12 feet and played the par 5s in 1 over. No wonder he called that “some of the best golf I’ve played all year.”

“It just wasn’t my day today on the greens,” he said.

The top 100 from the FedEx Cup advance to the second playoff event next week outside Boston, with the top 70 advancing to third event in Denver and the top 30 going to East Lake in Atlanta for the Tour Championship and a shot at the $10 million prize.

Lee Westwood kept his PGA Tour season going – barely. He shot a 73 and made the cut on the number at 1-over 143. Because 79 players made the cut, there will be a 54-hole cut Saturday, only the second such cut in the playoffs since the new policy began in 2008.