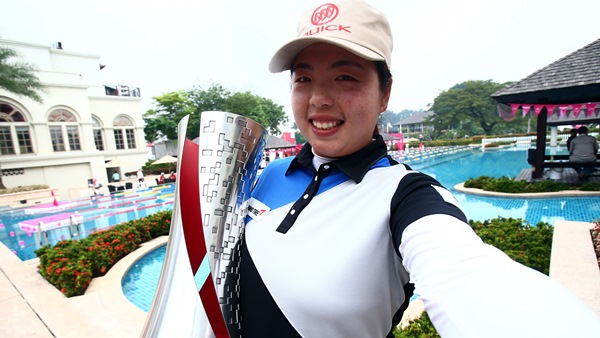 KUALA LUMPUR, Malaysia – China’s Shanshan Feng rallied to win the LPGA Malaysia on Sunday for her fourth LPGA Tour title, playing a six-hole stretch on the back nine in 6 under.

The 25-year-old Feng, four strokes behind Thailand’s Pornanong Phatlum entering the round, closed with a bogey-free 8-under 63 for a three-stroke victory over Phatlum.

“I like to come from behind,” Feng said. “I had no pressure at all today. … What I was doing was just to focus on every shot and just try to do my best and hope that putts can fall.”

Feng birdied Nos. 11-14 to tie Phatlum at 16 under and pulled away with a four-stroke swing when she holed a 10-foot eagle putt on the par-5 16th and Phatlum made a double bogey on the par-3 15th. She set up the eagle with a 3-wood approach similar to the shot that led to a winning eagle last year in China in the Reignwood LPGA Classic.

“I hit the 3-wood with like a smooth swing,” Feng said. “Then I was hoping to get a good bounce, which I did. It reminded me kind of like 18 hole Reignwood last year. Same club. It’s the magic 3-wood again. I made an eagle again. I think that was pretty important for my win.”

She parred the last two holes to finish at 18-under 266 at Kuala Lumpur Golf and Country Club.

Playing a group behind Feng, Phatlum birdied the 16th and closed with two pars for a 70. She was trying to become the LPGA Tour’s first Thai winner.

Sweden’s Pernilla Lindberg and South Korea’s So Yeon Ryu and Chella Choi tied for third at 14 under. Lindberg had a 63, and Ryu and Choi shot 67.

Lydia Ko missed a chance to take the No. 1 ranking from Stacy Lewis. The 17-year-old New Zealander needed to win and have Lewis tie for 12th or worse. Instead, Ko closed with a 70 to tie for eighth at 11 under. Lewis had a 69 to tie for 21st at 7 under.

Feng is projected to jump from ninth to fifth in the world. In addition the victory last year in China, she also won the 2012 LPGA Championship and 2013 Titleholders.

She was second last year, four strokes behind Lexi Thompson.

“I’ve had a very good record here,” Feng said. “Maybe just one time I was out of top 10. Last year, I came close. I was second. So this year, I improved.”

The tournament was the second in the tour’s six-event Asian swing. The LPGA KEB-HanaBank is next week in South Korea, followed by the Blue Bay LPGA in China.