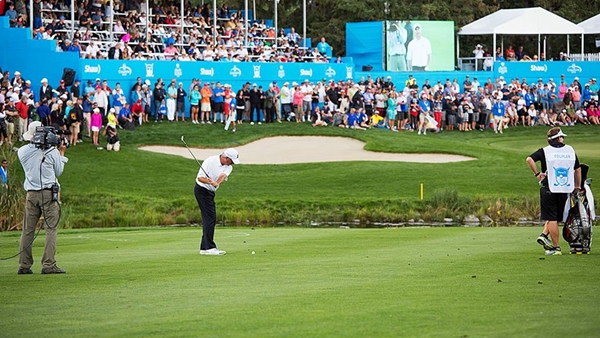 CALGARY — The Shaw Charity Classic has rewritten the history books for the second straight year with another record-setting charitable contribution for a Champions Tour event.

“The Shaw Charity Classic has always been focused on providing Calgarians with the opportunity to witness elite golf, but more importantly to raise significant money to support children’s charities in the province,” said Clay Riddell, tournament chairman, Shaw Charity Classic. “All of Calgary contributed to this incredible achievement – from the more than 1,400 volunteers, generous support from our corporate partners, unprecedented media coverage and the thousands of golf fans that lined the fairways to watch one of the best fields on Tour. Thank you to the entire community for helping us achieve our goals!”

In June, Shaw Communications Inc. reinforced the importance of children’s charities behind the award-winning tournament in the Stampede City by stepping up to commit $1.275 million to the Calgary Police Foundation funded program YouthLink Calgary Police Interpretive Centre and Hull Services – the title sponsor’s two official charitable partners for the second annual Champions Tour event in Calgary.

“On behalf of Shaw and our over 14,000 employees across Canada, we would like to thank everyone helped make this year’s tournament an outstanding event, and we can’t wait for next year,” said Brad Shaw, CEO, Shaw Communications Inc. “We are privileged to work alongside YouthLink Calgary Police Interpretive Centre, Hull Services and the other charities to improve the lives of children and families and give back to our community.”

Tournament officials are already focused on staging an even better event in its third year, thanks to a new date announced for the Calgary stop on the 2015 Champions Tour calendar. The legends of the game will return to Calgary earlier next summer to tee it up, August 5-9, 2015, at Canyon Meadows Golf and Country Club.

“Holding the event earlier in the summer provides a greater chance for better weather, but more importantly even more opportunities to work with our corporate partners, and for attracting even more golf fans to the tournament,” said Sean Van Kesteren, tournament director, Shaw Charity Classic, who added volunteer registration for the 2015 event also opened on Friday. “We have already witnessed some of the largest crowds on the Champions Tour in our first two years, but Calgarians traditionally are enjoying the final long weekend of summer out of town, so we believe this schedule change by the Champions Tour will help us take the tournament to an even higher level.”