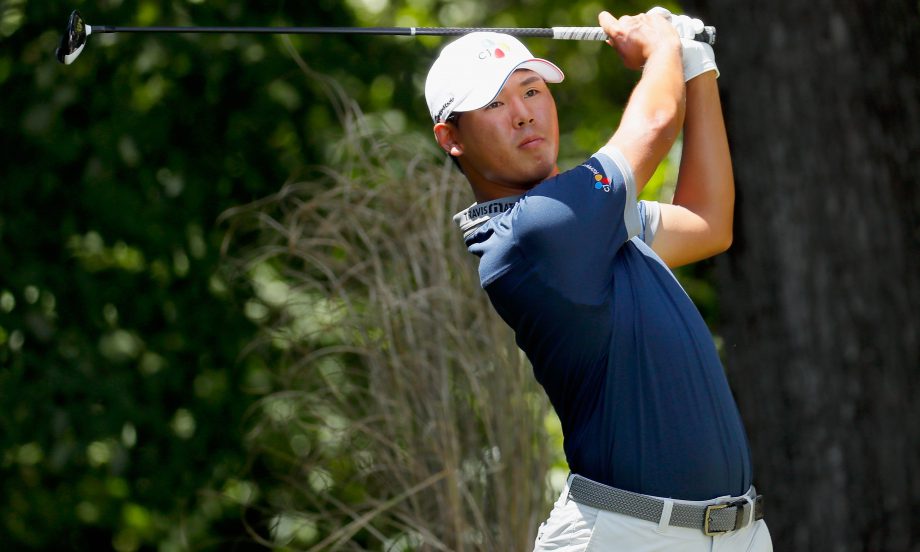 GREENSBORO, N.C. – Si Woo Kim followed his tournament-record 10-under 60 with a third-round 64 on Saturday to increase his lead to four strokes in the Wyndham Championship.

The 21-year-old South Korean player had an 18-under 192 total at Sedgefield, a stroke off the tournament 54-hole record set by Carl Pettersson in his 2008 victory.

Kim is in contention for his first PGA Tour victory for the second time in a month after losing a playoff to Aaron Baddeley in Alabama in the Barbasol Championship.

“I think tomorrow is much pressure, but I’m just trying to keep confidence. That’s it,” Kim said. “I feel very good now. My shots like much more consistent. Only problem have pressure. … I’m experienced before like Alabama in Barbasol, that’s good experience. Good for tomorrow.”

After making an eagle and eight birdies Friday, Kim played the front nine in 3-under 35 on Saturday with four birdies and a bogey. He added birdies on the par-4 13th, par-5 15th and par-4 18th.

Rafa Cabrera Bello was second after a 65 in the PGA Tour’s regular-season finale. The Spaniard was fifth last week in the Rio Olympics.

“The greens are brilliant,” Cabrera Bello said. “You play good and give yourself chances you will roll putts and that’s what I’m going to try to do tomorrow.”

Jim Furyk, Luke Donald and Kevin Na were 13 under.

Furyk is playing his first event since shooting the first 58 in PGA Tour history Aug. 7 in the Travelers Championship. After playing a three-hole stretch in 4 under with a 60-footer for eagle on 15 and two birdies, he bogeyed the final two holes for a 67.

“I hit a poor tee shot left and had to chip out,” the Englishman said. “I had a good number with a little wedge, stick it to that pin. Would have been disappointing to drop one there after playing so well for the rest of the round.”

Na made a double bogey on 18 for a 67. He hit over the green, chipped off the front edge, and ended up missing a 4-foot par try.

Graeme McDowell, Billy Horschel, Brandt Snedeker and Hideki Matsuyama. McDowell birdied the final four holes for a 64. Horschel also shot 64, Snedeker had a 65, and Matsuyama a 68.

“It’s nice to get the juices flowing a little bit tomorrow,” McDowell said. “I came here for a couple of reasons this week. Obviously, as a bit of a warmup for next week going into the playoffs with Atlanta being my big goal this season and partly to try put myself back on the Ryder Cup radar.”

“We’re just plugging along,” Reed said. “I just need to tidy it up. It’s close. I go through spurts like today, I went through spurts, nine holes, playing some really solid, pretty good golf and then I go to the back nine and just started getting a little loose. I need to get that better and just kind of figure out a way to tighten it up for all 18, not just nine.”

Adam Hadwin of Abbotsford, B.C., collected five birdies on the day, including three across a bogey-free back nine. The 4-under 66 performance moved him into a share of 25th.