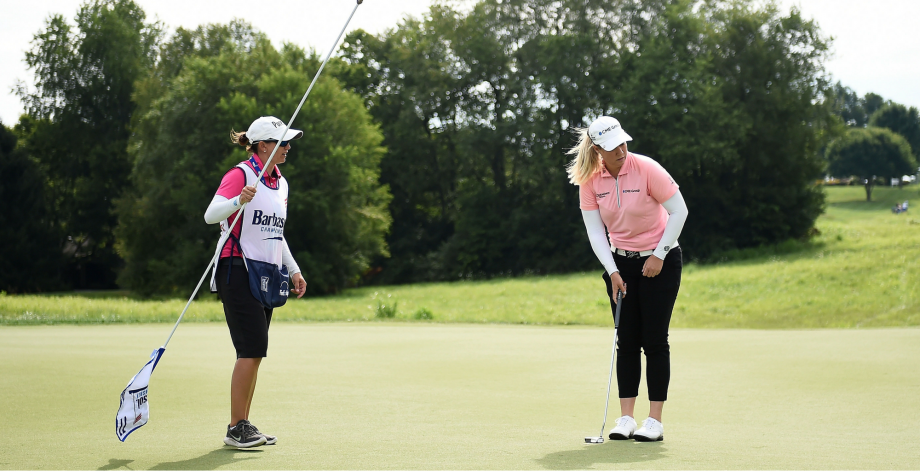 NICHOLASVILLE, Ky. — Canadians Nick Taylor and Ben Silverman were the top Canadians after the first round of the Barbasol Championship on Tuesday, sitting five strokes off the lead at 5 under.

Brittany Lincicome has a huge hole to climb out of if she hopes to make golf history.

Lincicome shot a 6-over 78 in the first round of the Barbasol Championship on Thursday, leaving the LPGA Tour pro’s goal of making the cut likely out of reach.

Lincicome was hoping to become the second woman to make the cut in a men’s event and the first since Babe Zaharias in 1945. She’s the first woman to get a PGA Tour start since Michelle Wie a decade ago.

Troy Merritt surged to the first-round lead with a 10-under 62, equaling the course record on the Champion Trace course at Keene Trace Golf Club, which is hosting the event for the first time.

However, much of Thursday’s attention centred on Lincicome, whose eight LPGA Tour victories include two majors.

Although Lincicome expected to struggle with the length of the golf course, her worst holes were two par 3s. She missed her tee shot well right on the 191-yard seventh _ her 16th hole of the day _ leaving her a difficult pitch from a downhill lie in the rough. That came up short of the green and she ultimately made a triple-bogey 6.

“Probably one too many clubs,” Lincicome said of her tee shot. “Hit it short of there in case I do miss the green, because over that green was absolutely dead.”

On the 205-yard 18th, her tee shot came up short in the water, leading to double bogey.

She played the other 16 holes in 1 over, making her only birdie on the par-4 third.

Lincicome ended up in a three-way tie for 129th and would likely need a round in the mid-60s on Friday to make the cut.

“If I can drive it like I did today and just make a few putts here and there, I think I’ll be back in good shape,” Lincicome said.

“It’s out there. I was much calmer than I thought I was going to be. I love playing with the guys. It’s so much fun being inside the ropes with them. Hopefully, I can get a good one tomorrow.”

Lincicome was cheered while being introduced on the 10th hole. Her gallery was among the largest and encouraged playing partners Sam Ryder (68) and Conrad Shindler (72).

Initially concerned about nerves, Lincicome got off to a solid start with pars on her first three holes. She appeared unfazed by a bogey on No. 13 after her 10-foot par putt edged the cup.

Lincicome bogeyed the par-4 16th, but her quest became tougher after the double-bogey 5 on 18. She hung in and was able to post her only birdie before unraveling on the seventh.

Lincicome’s goal now is remembering what she did well and using it to salvage what’s left of her PGA Tour debut.

“Pretty happy with my game overall,” she said. “I had two bad holes, but I drove it well. I did all the things I said I needed to do, but my putter let me down today.”

Playing in the afternoon and using a new putter, Merritt surged into the lead by shooting 6 under on his second nine. He holed a 34-footer for eagle on the par-5 sixth, and his four other birdies on the side were from inside 11 feet.

“This is a week where you might have to get up to 20 under to win this thing,” said Merritt, who got his only tour victory in 2015. “We were just fortunate enough to make a lot of birdies and didn’t make any mistakes.”

The golf course was firm on Thursday, but that may change with thunderstorms in the forecast Friday.

Andres Romero, Billy Horschel and Joel Dahmen shot 65s and were three shots back. Hunter Mahan was one of eight players to shoot 66.

Eleven years ago, the last time the British Open was played at Carnoustie, Romero finished alone in third, one shot out of a playoff won by Padraig Harrington. But the up-and-down Argentinian hasn’t won in the U.S. in a decade and didn’t qualify for the Open this year.

He tied for seventh last week at the John Deere Classic in only his third PGA Tour start of the season.