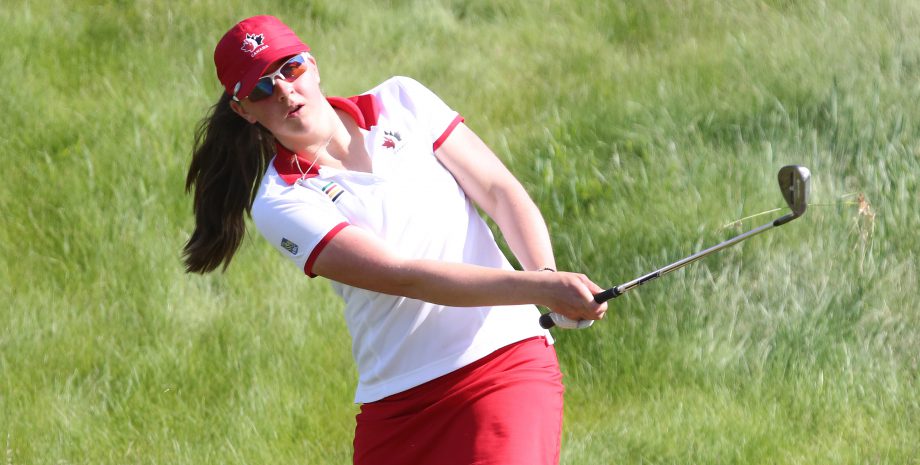 MISSISSAUGA, Ont. – The world’s top female junior golfers will head to Mississauga for the third edition of the World Junior Girls Championship from September 25-30 at Mississaugua Golf & Country Club. Two teams of three athletes will don the red and white of the host nation as Canada competes for the title of World Junior Girls champion.

“It is an honour to represent your country and we look forward to welcoming these players to Canada,” said Tournament Director Mary Beth McKenna. “The course is in fantastic shape and we are thrilled to host some of the world’s best juniors at this historic club. Our partners at Mississaugua and the communities in the surrounding area have come together to make this a truly memorable event for our competitors.”

Representing Canada One will be Mississauga, Ont., native Chloe Currie who will look to translate home course advantage into success on the international stage. The member of Mississaugua Golf & Country Club has had a banner year, capturing the 2016 Ontario Juvenile Girls Championship before defending her Ontario Junior Girls title. At the national level, the 16-year-old Team Canada Development Squad member collected runner-up results at the CN Future Links Pacific Championship and the 2016 Canadian Junior Girls Championship.

Completing the Canada One contingent is Monet Chun of Richmond Hill, Ont. The 2016 Team Ontario member claimed her first CN Future Links title at the Quebec edition of the regional cross-Canada championships for junior golfers. The 15-year-old earned a share of second at her province’s amateur championship before finishing T11 at the national event for amateurs. Chun secured an eighth-place result at the Canadian Junior Girls Championship.

As the host country, Canada reserves the right to field two teams in the 48-player, 15-country competition. Céleste Dao earned her place on the Canada Two squad following an impressive season. A fifth-place showing at the Quebec Women’s Amateur Championship propelled the Notre-Dame-de-L’Île-Perrot, Que., native into a runner-up result at her province’s Junior Girls Championship. She tied for eighth in the stroke play component of the U.S. Girls’ Junior before claiming a share of sixth at Canada’s National Junior Girls Championship. The 15-year-old’s season culminated in a convincing nine-stroke victory at the Graham Cooke Junior Invitational.

The third and final member of Canada Two is Isabella Portokalis – the 2016 CN Future Links Ontario champion. The London, Ont., native’s 2016 season includes a T2 at the Ontario Junior Girls Championship and a share of seventh at her provincial Women’s Amateur. The 2016 Team Ontario member’s performance at the Canadian Junior Girls Championship earned her a T11 result before she collected a sixth-place finish at the Ontario Juvenile Girls’ Championship.

“Golf Ontario is excited to once again partner with Golf Canada to conduct this global championship at another of Ontario’s storied clubs – Mississaugua Golf & Country Club,” said Mike Kelly, Golf Ontario Executive Director. “We thank their membership and volunteer committees for all their hard work. We are thrilled for our athletes from Ontario who have been selected to represent Canada and wish them the best of luck.”

“These six athletes have had tremendous seasons and their selections to Team Canada are the result of their hard work and commitment to the sport,” said Jeff Thompson, Golf Canada’s Chief Sport Officer. “The Provincial Golf Associations, their home clubs, their parents and of course, the athletes themselves – their joint efforts have made this accomplishment possible and they should all be proud.”

While highlighting the work of those involved with the newest members of Team Canada, Thompson also spoke highly of the talented juniors from coast to coast.

“The selection of these teams was not an easy task. Across the nation, the level of skill shown by our junior-aged players speaks to not only the passion for golf in Canada, but also the excellent work done by golf facilities and our provincial partners to hone the skills of our athletes. We look forward to seeing these six players represent Canada against a number of the best juniors in the world.”

The second edition of the tournament was conducted at Ottawa’s The Marshes Golf Club where the trio representing the Republic of Korea completed a wire-to-wire victory to secure the team title. Paju-si, South Korea native Hye-jin Choi finished 12-under in claiming a seven-stroke victory. Choi is currently the No. 15-ranked amateur in the world and counts a victory at the 2016 Canadian Women’s Amateur Championship among her accomplishments.

In addition to the 72-hole team and individual competitions, the World Junior Girls Championship will celebrate the sport and focus upon the promotion and development of junior girls golf. Golf Canada will host a PGA of Canada coaches clinic and a girls skill development clinic in the days leading up to the competition’s first round on Tuesday, September 27.

Admission to the competition is free.