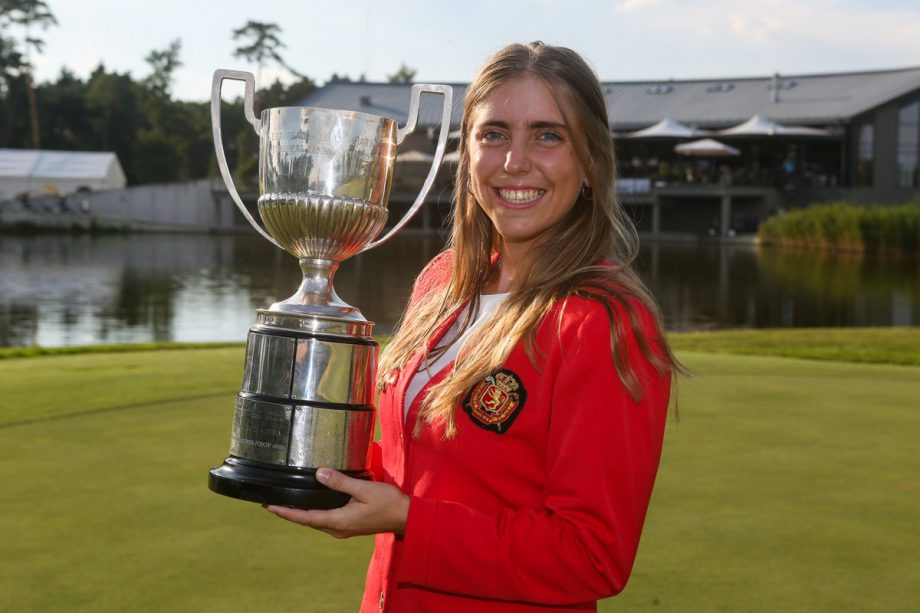 AMES, Iowa – They had both recently turned 22 and were residing in the same Iowa college town but their lives couldn’t have been more different before allegedly intersecting in the most violent way.

Celia Barquin Arozamena was a top amateur golfer from Spain who was finishing her degree at Iowa State University. Collin Daniel Richards was a former inmate from small-town Iowa with a history of violence.

The Big 12 conference champion, Barquin had dreams of making the pro tour and spent hours practicing at Coldwater Golf Links in Ames. Jobless and homeless, Richards had been living in a tent in an encampment near the course and had spoken of his desire to “rape and kill a woman,” police said.

Richards was charged with stabbing Barquin to death during a random attack while she was golfing by herself in broad daylight on Monday morning. Barquin’s body was found in a pond on the course near the ninth hole after fellow golfers noticed her abandoned bag and called police. Richards was arrested within hours, suffering from injuries to his face and hand after Barquin apparently tried to fight him off, investigators said.

As Barquin’s colleagues began grieving the loss of a talented teammate and classmate, Richards was ordered jailed on a $5 million cash-only bond at the county jail and facing the rest of his life in prison. It was, said Iowa State football coach Matt Campbell, a “cowardly act of violence.”

The university had planned to honour Barquin at its football game Saturday for being its female athlete of the year – news that had brought Barquin to tears, according to athletic director Jamie Pollard. Instead, football players will wear helmet decals with her initials to mourn the loss.

“We’re all devastated and heartbroken,” said Pollard, who choked back tears at a news conference.

The golf course issued a statement calling Barquin an amazing young woman with an infectious smile who “made the people around her better.”

Barquin was a top golfer in Spain as a teenager and came to Iowa State to pursue her career, drawn by its facilities, coaches, and picturesque campus. She became one of the best in school history and was completing her civil engineering degree after exhausting her athletic eligibility earlier this year. She recently won an amateur tournament in Europe and competed in the U.S. Women’s Open Championship.

Richards had lived in small towns throughout western Iowa, residing with his mother, father and grandparents at various times. He ended up in Ames in January 2017 when he was placed in a halfway house there after violating his probation, court records show. By then, he had convictions for burglary, theft, criminal mischief and harassment. A judge revoked his probation, and he was sent to prison in November 2017.

Richards left a state prison in southeastern Iowa in June after completing the sentence. Soon he was back in Ames, arrested weeks later after being found passed out at a liquor store and admitting that he drank heavily after taking antidepressants.

Police Cmdr. Geoff Huff said homicides are rare in the city, and it’s “very troubling for something like this to happen in broad daylight.”

Police said officers recovered a knife that Richards had given to acquaintances after the slaying, as well as bloody clothing from his belongings.

Officers were called to the course around 10:20 a.m. Monday to investigate a possible missing female player. They found Barquin’s body in the pond with several stab wounds to her upper torso, head and neck, according to the complaint filed Tuesday against Richards.

A police dog tracked Barquin’s scent to a homeless encampment along a creek near the golf course where Richards had been living in a tent, the complaint said. Officers found Richards with several fresh scratches on his face consistent with fighting and a deep laceration in his left hand that he tried to hide, it said.

“What did he do to her?” an acquaintance of Richards allegedly asked officers who were searching the area.

That man told investigators Richards had said in recent days that he had “an urge to rape and kill a woman,” the complaint said. A second acquaintance told police that Richards arrived at his nearby home on Monday appearing “disheveled and covered in blood, sand and water” before bathing and leaving.

Court records show that since 2014, Richards had been charged with abusing a former girlfriend, stealing a pickup truck after wrecking his own vehicle, using a baseball bat to smash a car window and burglarizing a gas station. In one case, the Iowa State Patrol seized a long knife from him during a traffic stop. In another, he threatened to return to a convenience store to shoot clerks after they caught him shoplifting.

Barquin’s former team announced Tuesday it was pulling out of the East & West Match Play in Ann Arbor, Michigan, to grieve their loss. Women’s golf coach Christie Martens said Barquin was an “outstanding representative of our school.”

Professional golfer Sergio Garcia, one of Barquin’s favourite players, tweeted that he was heartbroken by the news.

Heartbroken over what happened to #CeliaBarquinArozamena I had the pleasure of meeting her and I know she was a special person. Sending my thoughts and prayers to her family and loved ones in this difficult time

Garcia wasn’t the only golfer to take to social media to express their condolences. Several Canadian golfers also shared their thoughts.

You can’t even explain such lose. RIP Celia🙏🏻🙏🏻 https://t.co/pGbxEYUYxh

So heartbreaking😢… As a former college golfer and student, if there was any place that was safe, the golf course was just that. My heart goes out to the family, friends and teammates. RIP Celia https://t.co/LBlrtcnEU6

This really brings tears to my eyes. Cannot believe such a horrible thing could Happen to such a nice person. Can’t even describe in words how I’m feeling right now. RIP Celia. https://t.co/4oV3N1o8HC

I cannot imagine why this would happen to anyone. To her family, friends and teammates you are in my thoughts. Rest In Peace Celia. https://t.co/HV6QDkOhkI

How many times have we enjoyed the solitude of playing a round on our own? Early morning, late evening, just you and the course. I can’t fully wrap my head around something like this happening. RIP https://t.co/2m67vHYQZP