Sloan finishes in the top-ten at Pinnacle Bank Championship 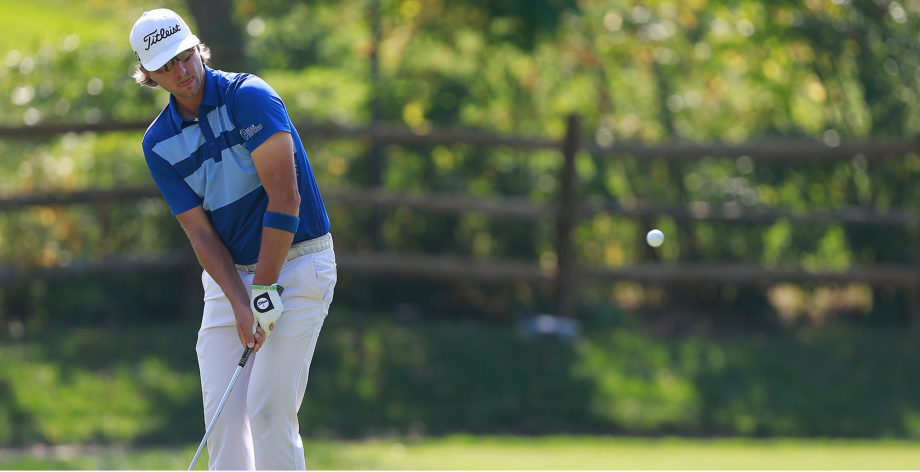 ELKHORN, Neb. – Calgary’s Roger Sloan climbed up twenty-one spots to finish the Pinnacle Bank Championship in a tie for 10th.

Sloan had a strong bogey-free back-nine and carded a 66, the second lowest score of the day, to finish at 10 under.

All David Skinns’ four-year-old son, Brayden, wanted was a trophy. Skinns fulfilled his son’s wish on Sunday in Elkhorn, Nebraska, securing his first Web.com Tour win in his 65th career start.The 36-year-old from Lincoln, England birdied the 72nd hole at The Club at Indian Creek for a two-stroke victory at the second annual Pinnacle Bank Championship presented by Heartland Chevy Dealers. Skinns’ 16-under-par 268 total earned him a first-place prize of $108,000 and moved him from No. 132 to No. 33 on the money list.

“It’s been a really long journey,” said Skinns, during the trophy presentation. “I don’t want to say I didn’t think it could happen, but I’m 36 years old. I’ve been at it for a while and it was relief, complete relief that I finally got it done.”

Leading money earner Sungjae Im extended his advantage with a runner-up performance, his third of the season. Fellow Tour rookie and 2017 Mackenzie Tour – PGA TOUR Canada Player of the Year Kramer Hickok all but secured his PGA TOUR card with a solo third.

Skinns turned professional in 2006 after an outstanding collegiate career at the University of Tennessee where he was named Southeastern Conference Freshman of the Year and a part of Europe’s winning 2003 Palmer Cup team. The father-of-two was poised for success in the professional ranks after racking up the accolades during his tenure in Knoxville.

It took a few years for Skinns to get settled in on the Web.com Tour. During his rookie season in 2012, the Suwanee, Georgia resident played in eight events, recorded three top-25s and ended the year No. 125 on the money list. He had similar results in 2014 with one top-10 in 11 starts and a 101st-place finish.

A week later, Skinns missed the first cut in the first Finals event and was poised for another breakout performance, this time at the Albertsons Boise Open presented by Kraft Nabisco. After scores of 69-66, Skinns was T9 heading into the weekend and received a call that his wife, Kristin, was going into labor. He quickly withdrew from the tournament as the two celebrated the birth of their second son, Bennett.

“Having that happen in Boise last year, it feels good to have that pay off, “ he said. “I know I made the right decision, but to get a win kind of validates it.”

Skinns has been plagued with back issues for the better part of two years and last week, during the Utah Championship presented by Zions Bank, his back turned on him resulting in another weekend off.

“It’s been a long year,” said Skinns, who made six cuts in his first 16 starts. “I’ve had a lot of 30th-place finishes (where) I thought I was playing okay. I felt like I could win out here, came close in Portland last year and didn’t quite get it done.

“Just complete relief,” he continued. “I started thinking about my family and what they’ve been through this year. Because, it’s been a rough year so far. But it was a lot of emotion and it all came to a point.”

There is no question Skinns made the right call. Everything he’s gone through to get to this point has been for his family. The support he receives from Kristin has helped drive him to overcome multiple injuries and break through at the Pinnacle Bank Championship.

“My wife is so supportive,” he said. “She takes care of two kids and works a full-time job when I’m not there. For her to give me the opportunity to do this is what keeps me going. I owe it to her to give it everything I’ve got every day, and that’s what I try to do.”

Im continues to impress each week of his rookie campaign after securing his PGA TOUR card earlier this season. With the race for Player of the Year heating up, the 20-year-old from Jeju Island, South Korea turned in his third second-place showing and now leads Scott Langley on the Regular Season money list by more than $109,000.