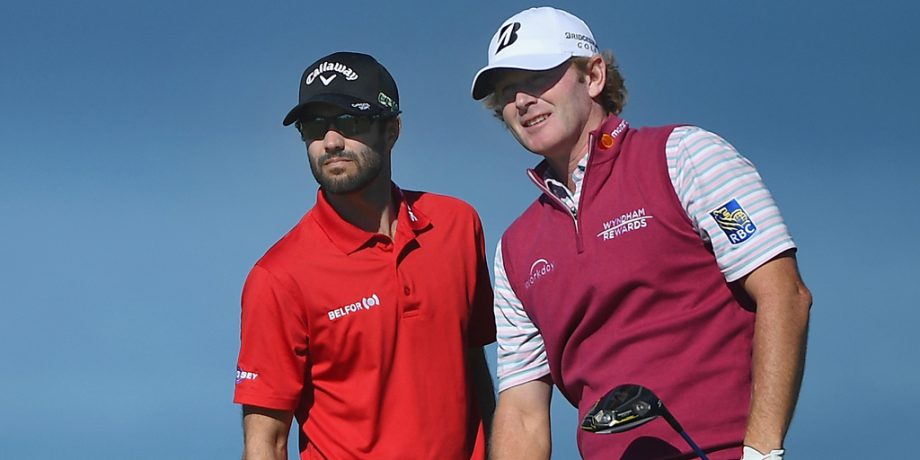 SAN DIEGO – Patrick Rodgers had a clean scorecard to match a picture-perfect Saturday at Torrey Pines and shot a 5-under 67 to share the lead with defending champion Brandt Snedeker in the Farmers Insurance Open.

Snedeker, trying to become only the fourth player to win back-to-back at Torrey Pines since the tournament began in 1952, didn’t get much out of his round of 70. His three birdies were all inside 6 feet, and the longest putt he made was for par.

Even so, being tied for the lead is a better spot than his last two victories. He rallied from seven shots behind in 2012 and won in a playoff against Kyle Stanley, who made triple bogey on the final hole. Last year, he made the cut on the number and was six shots behind going into the final round.

That doesn’t figure to make it any easier.

Snedeker and Rodgers were at 9-under 207, and 15 players were within three shots of the lead.

Rodgers is the latest player from the high school class of ’11 with a chance to shine, an athletic and powerful player who has been patiently waiting his turn. He picked up a little extra motivation from watching one of his best friends, former roommate Justin Thomas, sweep the Hawaii swing.

Before Thomas, it was Jordan Spieth who picking up big trophies at an alarming rate.

“I can’t sit here and say it hasn’t been hard at times,” Rodgers said. “Obviously, these are my best friends so I’m happy every time they have success. But on a personal level, I mean, those are the guys that I’ve always competed with and so it definitely tests my patience to see them have success and it’s incredibly motivating.”

And it’s not just Rodgers.

Also in range of a victory Sunday are two others from that class of 2011. C.T. Pan of Taiwan, who played at Washington, birdied three of his last five holes for a 69 and was one shot behind. Ollie Schniederjans struggled on the back nine but still managed a 71 and was two shots behind.

Also in the mix was Pat Perez, who grew up at Torrey Pines and whose father, Mike, is the starter on the first tee. Perez shot a 67 and goes into the final round just two shots behind.

Not to be forgotten was Phil Mickelson, who played on the opposite end of the course as the leaders and shot 68 to get within four shots. Mickelson is a three-time winner of the tournament, but not since 2001.

Justin Rose, who started the third round with a one-shot lead, fell behind on the second hole and never caught up. He shot 73 and was in the large group at 7-under 209.

But it starts with Snedeker, the Tennessee native who loves the poa annua greens on the West Coast. A two-time winner at Torrey, he also has won at Pebble Beach. Snedeker has learned to accept the bad bounces, which is one reason he believes he does well.

His patience was tested on Saturday. Snedeker hit the ball so well that he only came close to bogey twice _ his lone dropped shot was on No. 12 _ and he missed seven birdies putts from the 15-foot range and closer.

“It was tested a lot,” Snedeker said. “That’s part of it. If you’re going to love poa, you have to love days like this, too, where you hit a lot of great putts and they just don’t want to go in for whatever reason. … I didn’t let it affect my game plan, didn’t let it affect the way I thought out there or did anything like that. This golf course does a great job of trying to make you do that, so proud of the way I hung in there.”

Rodgers was helped by a new putter from Odyssey that he put in the bag two weeks ago, in part because he liked the look, and in part because it’s called “Indianapolis.” That’s where Rodgers grew up, and the putter was named because of its technology came from Indy race cars.