Spieth grinds out “must win” over Ikeda 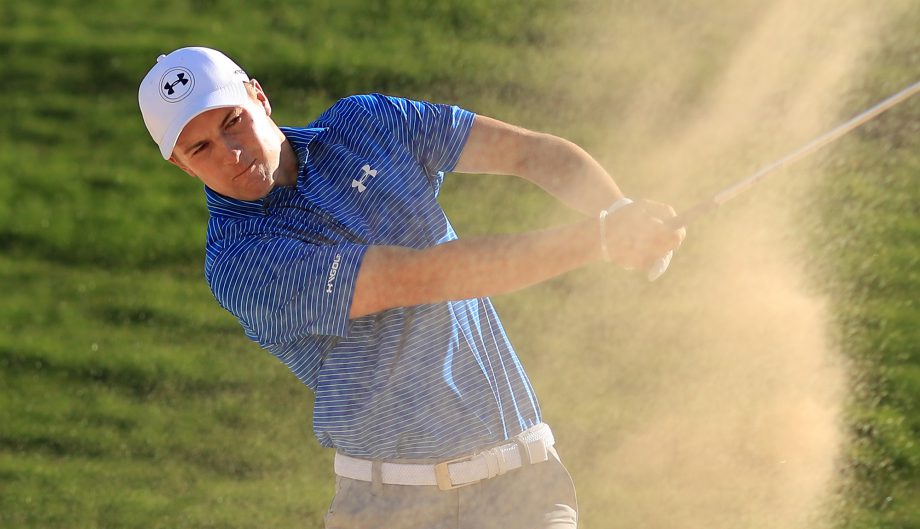 AUSTIN, Texas –With a big lead on the back nine, Jordan Spieth put the ball in water again.

This time, there was no collapse, just a grind-it-out “must win” to beat Japan’s Yuta Ikeda in Thursday’s second round at the Dell Technologies Match Play in gusty wind that lived up to the legendary tough conditions of Texas golf.

Spieth beat Ikeda 4-and-2 at the Austin Country Club a day after losing his first-round match by the same score to Japan’s Hideto Tanihara.

Thursday’s victory, coupled with the draw between Tanihara and Ryan Moore, leaves Spieth needing to beat Moore on Friday and for Tanihara to draw or lose to Ikeda if Spieth is to move on to Saturday’s knockout rounds.

“I’ve got to play better than I did the last two days and I know that. I’ve just got to have complete trust because why not at this point. It’s a win or go home situation,” Spieth said.

The pair made the turn with Spieth 2-up before he stuck his tee shot to within 18 inches on the par-3 11th and tapped in for birdie to win the hole. But Spieth hit a wild tee shot on No. 13 that plunked into the Colorado River – much wider than Rae’s Creek at Augusta – and he peeled out of the shot in disgust.

Instead of seizing the opening for a rally, Ikeda’s tee shot splashed as well. They halved the hole and Spieth steadily closed out the match without any mistakes the rest of the way.

“We both made a mess of the 13th, but all in all, it was a step in the right direction after yesterday,” Spieth said, referring to his opening-round 4-and-2 loss to Tanihara.

As a Texas native, playing in the Lone Star State provides both a comfort zone and an emotional pressure cooker for Spieth.

He plays in front of adoring galleries who cheer his big shots and groan over his mistakes. Youngsters plead for autographs or high-fives whenever he’s within reaching distance. And the Austin Country Club, where he played several times during his short college career at the University of Texas provides a familiar layout of rolling hills and windy riverside greens.

The pressure of his week also comes from what awaits him in two weeks: a return to the Masters, where he won in 2015 but blew a five-shot lead on the back nine last year in an epic collapse as England’s Danny Willett won.

Willett, playing in Spieth’s home territory, has had a ragged tournament with two losses already. A 6-and-5 loss to Bill Haas on Friday eliminated Willett from playing on the weekend.

Before he’d even teed up in Austin, Spieth said he’s ready for this year’s Masters and the questions about the collapse to be behind him. Then he opened the match play tournament with the loss to Tanihara.

Needing a win Thursday just to give himself a chance to get to the championship rounds, Spieth was greeted with a large crowd at the first tee and “Hook’em Horns!” cheers at every hole. Spieth was 3-up after eight holes as the wind belted the players on every swing.

A bogey on the par-4 10th allowed Ikeda an opening until Spieth’s laser tee shot into the 11th put him back in control.

“(Conditions) were about as tough as I think I’ve ever seen it. I couldn’t really fall back on much from school,” Spieth said. “In match play, you’re not upset with these conditions. One-on-one, I think the tougher conditions are better for us. We’ve kind of always believed that so I kind of hope tomorrow is more of the same.”