Spieth wins at Innisbrook in a playoff 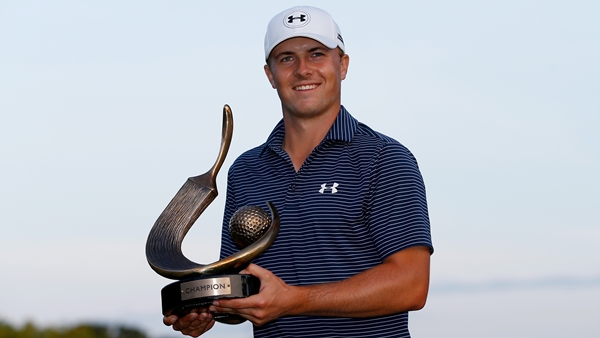 PALM HARBOR, Fla. – Jordan Spieth and his world-class short game came up big in a playoff victory Sunday at the Valspar Championship.

Spieth capped off an afternoon of back-nine charges, clutch putts and unseemly par saves by making a 30-foot birdie putt on the third extra hole of a playoff at Innisbrook to beat Ryder Cup teammates Patrick Reed and Sean O’Hair.

“A crazy back nine,” said Spieth, who won for the second time in his PGA Tour career and fourth time worldwide to reach a career-high No. 6 in the world.

The 21-year-old Spieth was three shots behind with six holes to play when he made two birdies to catch a faltering Ryan Moore, and then saved par on his final three holes for a 2-under 69 to join the playoff. And these par saves were not what anyone would call routine.

With his right foot in the bunker and his left foot on grass well above the ball in the sand, he blasted out to 3 feet on the 16th. From deep rough on a hill, he hit a flop shot to a short pin to 6 feet to stay tied for the lead. And he holed a 12-foot par putt on the 18th that fell in the left side of the cup.

Reed was just as impressive with his short game to keep his hopes alive in the eighth and perhaps most compelling playoff on the PGA Tour this season. He buried a 30-foot birdie putt on the 18th hole for a bogey-free 66, pumping his fist as if he were still in Gleneagles at the Ryder Cup.

On the 18th hole in a playoff, he was buried in the lip of a bunker, blasted out to just under 10 feet and made par to stay in the game after Spieth missed from 10 feet. On the next playoff hole, the tough 16th, Reed had no chance well behind the green in grass so deep he could barely see his ball. That came out perfectly for another par.

Reed, who went the final 29 holes without a bogey on the Copperhead course, never had a chance to try for a third par save when Spieth hit the winner.

Not to be overlooked was O’Hair, who has had to earn his full PGA Tour card the last two years in the Web.com Tour Finals. The former RBC Canadian Open champion poured in a pair of big birdies on the back nine, including a 30-footer on the 16th, and made a tough par save on the 18th in regulation.

O’Hair had a 12-foot birdie putt for the win on the second extra hole, and the putt caught the right side of the cup.

Spieth earned a small measure of redemption against Reed, a friend and Ryder Cup partner. Reed beat him in a playoff at the Wyndham Championship in 2013 for the first of Reed’s four PGA Tour wins.

Only two players in 2015 have had at least a share of the 54-hole lead and went on to victory on the PGA Tour. Moore did not become the third. He holed a 7-iron on the sixth hole for an eagle to take a two-shot lead, and back-to-back birdies early on the back nine stretched his lead to three shots with six to play.

Moore went long and into thick rough on the par-3 13th and made bogey, and then dropped another shot on the 16th. He made one more bogey on the 18th when his hopes were gone, closed with a 72 and finished fifth.

That was the wrong direction to go with so many players charging to the finish line.

Reed ran into a pair of 12-foot birdie putts to get within one shot, and then made his big birdie on the 18th. O’Hair ran off four birdies in a six-hole stretch, and finished with a tough par. His drive went into the trees and his approach stopped against the collar of the green some 50 feet away. Using the blade of his wedge, he knocked it up to 5 feet and holed the putt for a 67 to join Reed at 274.

Henrik Stenson, in his Innisbrook debut, ran off three straight birdies and closed with a 67 to fall one shot short of the playoff.

Spieth came full circle at Innisbrook with the victory. Two years ago, his short game led to a birdie-par finish that paved the way for him to get a PGA Tour card after starting the season with no status. He went on to great things that year, including a victory as a 19-year-old and a spot in the Presidents Cup. And he hasn’t really stopped. Spieth went over $10 million for his career.

Nick Taylor carded his only above par round for the championship, a 1-over 72 Sunday, to tie for 24th at 3-under 282.

The other two Canadians in the field were David Hearn of Brantford, B.C. and Adam Hadwin of Abbotsford, B.C.