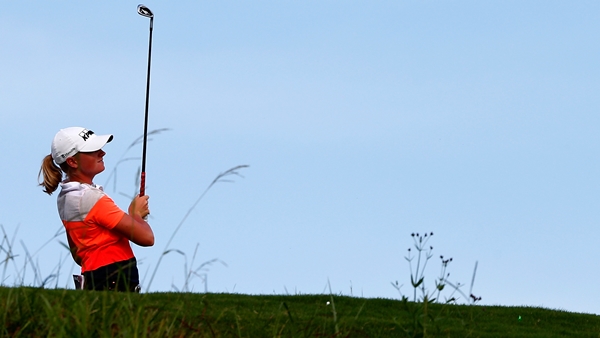 PRATTVILLE, Ala. – Top-ranked Stacy Lewis birdied the last three holes and five of the final six Thursday for an 8-under 64 and a share of the lead with Mi Jung Hur in the Yokohama Tire LPGA Classic.

Lewis, the 2012 winner in the event that was dropped from the schedule last year after losing its title sponsor, had a bogey-free round on The Senator course. She has a tour-high three victories this season.

“I grew up playing on Bermuda grass, which I think that helps a lot, you know, just reading greens and understanding the different types of lies, but it feels like home,” said Lewis, the former University of Arkansas star from Texas. “The heat, the humidity, I’m used to it.”

Lewis tied for 16th last week in France in the Evian Championship in the final major of the year.

“I played really solid last week and that golf course was just a little goofy and the scores just didn’t really show how I played,” Lewis said. “So I felt like things were coming along and getting closer and it showed out there. I hit my wedges a lot better, which is always a good sign for me. When my wedges get back on track that usually gets the entire swing back going in the right direction.”

Hur also had a bogey-free round. The South Korean player won her lone LPGA Tour title in 2009.

“It was awesome with bogey-free,” Hur said. “That was my goal for today and I make it. My shot was really working good and also my putter was very good, so everything was perfect.”

South Africa’s Paula Reto had a 65, and Cydney Clanton was another stroke back along with Sweden’s Karin Sjodin and Japan’s Ayako Uehara.

“I feel pretty much good with this course,” Hur said.

She’s coming off a tie for ninth in Portland, Oregon, and a tied for third in France.

“I feel so much comfortable after I did the top 10 in Portland,” Hur said. “I think my confidence, it made me feel better and better. Also my putting doing really great.”

“It was fun,” said Meadow, from Northern Ireland. “I mean, it’s not every day you hear Roll Tide for all of us, so it was really something special and I think it’s really cool we got to do it.”