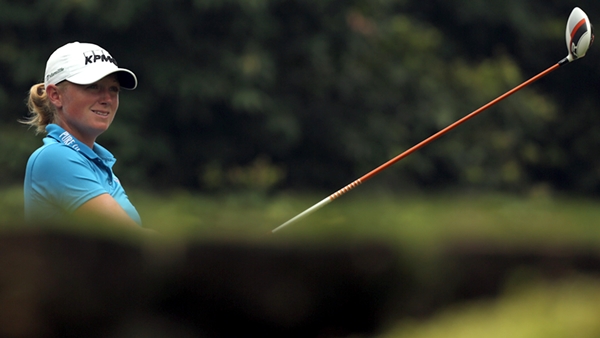 KUALA LUMPUR, Malaysia – Top-ranked Stacy Lewis shot a 6-under 65 on Thursday to take a one-stroke lead at the Sime Darby LPGA Malaysia, the second event of the tour’s six-tournament Asian swing.

Lewis birdied the par-5 16th hole to break away from a tight leaderboard at the Kuala Lumpur Golf and Country Club. Tied for second were the South Korean quartet of Na Yeon Choi, Hee Young Park, Eun Hee Ji and So Yeon Ryu.

Golfers from South Korea have won six of the last seven LPGA tournaments.

Amy Yang of South Korea and China’s Shanshan Feng were among a group tied for sixth after shooting 67.

“My goal was to shoot a 1 or 2 under on the front and I got off to a good start,” Lewis said. “It was kind of shaky on the first three holes but I just hung in there and gave myself a lot of birdie chances and I was fortunate to make a few. So it was a little bit of an ugly round, but I got a lot out of it.”

Choi, who teed off from the 10th, said she was pleased to be only one stroke behind after nearly putting her ball in the water on her approach on the par-4 second hole, her 11th of the day.

“I had one bogey out there, but I was lucky the ball did not roll into the water,” Choi said. “I hope to come back with a good feeling tomorrow.”

Feng finished tied for 49th in her native China last week, and was happy to be playing away from home this week.

“I’m more relaxed,” Feng said. “Last week, I think people wanted me to win again, and I told everybody I was not going to give myself pressure, but I think I still did a little bit. I tried too hard and actually it went the wrong way.”

Last week, South Korea’s Mirim Lee won the Reignwood Classic in Beijing for her second victory of the year. The LPGA KEB-HanaBank is next week in South Korea, followed by the Blue Bay LPGA in China.