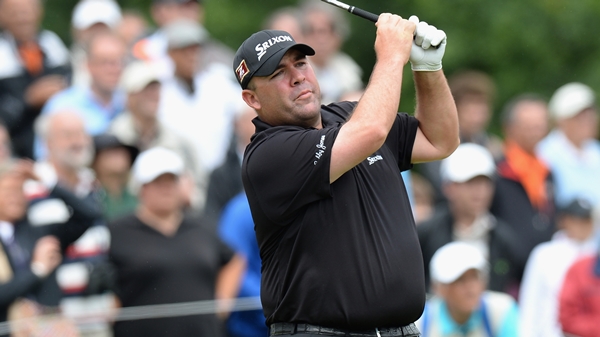 SAINT-QUENTIN-EN-YVELINES, France – In challenging conditions, Kevin Stadler shot a 1-over 72 and still managed to extend his lead to four strokes over Victor Riu and Thongchai Jaidee after the third round of the French Open on Saturday.

Leading since the first round, Stadler endured wind gusts and brief showers and made two bogeys and a birdie for a 9-under 204 total.

“I didn’t play that great,” Stadler said. “Made a whole lot of pars, a couple of nice up-and-downs for pars. Not nearly as many looks as I had the last couple of days, but you can’t expect to play that well for four days in a row.”

Riu, of France, wasted a solid front nine after the turn with six bogeys to card a 73, sharing second place with Thongchai, the Thai who shot 69. U.S. Open champion Martin Kaymer signed off on a 70 to move into fourth, six strokes off the lead.

“The way he plays golf and the way I know him, very laid-back guy, it will be difficult to catch him,” Kaymer said of Stadler.

Stadler could become on Sunday the first American to win this tournament since Barry Jaeckel in 1972. However, he will have to cope with a tight back.

“On 8, and from then on, it was just a little tight,” Stadler said. “But wasn’t too painful, and I could figure out how to get around after that.”

Stadler went into the third round with a three-stroke lead over Riu. But Stadler missed a short par putt on the third hole while Riu birdied No. 5 and No. 9 to claim a share of the lead at 9 under.

The momentum changed after the turn as Riu dropped his first shot of the day on the 10th by finding water off the tee.

Riu’s best result this year was 38th in Singapore in May. He has never won on the European Tour. On the other hand, Thongchai won the Nordea Masters last month in Sweden.

“My golf game is really very consistent right now,” Thongchai said. “Driver not too good today (but) the putting gives me a lot of chances.”

Stadler won the Phoenix Open in February and was tied for eighth at the Masters in April.