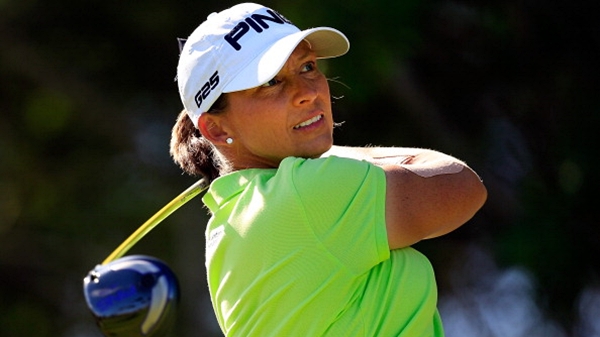 KAPOLEI, Hawaii – Angela Stanford shot an 8-under 64 on a wind-swept course to take a one-stroke lead after the second round of the LPGA LOTTE Championship on Thursday.

Stanford took the lead early with five birdies in a row on the front nine and finished the day with eight birdies. The best round of the tournament so far left the five-time LPGA Tour winner at 8-under 136.

Stanford said she was just trying to make it through the day.

“Finally, I got comfortable on these greens and it felt great. I mean, to see the ball go in that much is a lot of fun,” the 36-year-old said. “It was nice to see. I needed a round like that.”

Just like the first round, the contenders played day 2 at Ko Olina Golf Club with gusty winds – up to 18 mph, according to the National Weather Service.

“I think it’s more about putting. I hate to admit this, but I don’t always control my trajectory on purpose. It just kind of happens,” Stanford said. “When I get into the wind, and I’ve talked about this with my instructor, for some reason my body just starts moving into the ball more and I tend to keep it lower.”

Hawaii favourite Michelle Wie was one stroke back after a 67 that included five birdies.

Wie hit a birdie on the par-5 13th hole that helped her maintain momentum.

“That putt was really, really, really fast. It was downwind, down grain, downhill and I just barely touched it and I think the crowd rolled that one in for sure,” Wie said. “I thought it lipped out for sure, and it just kind of went around then, and so it was awesome.”

Jennifer Kirby of Paris, Ont. got into the red Thursday thanks to a 3-under 69. The University of Alabama grad’s best finish on tour this year was a tie for 36th at the JTBC Founders Cup last month.