Stars starting to line up for big summer of golf 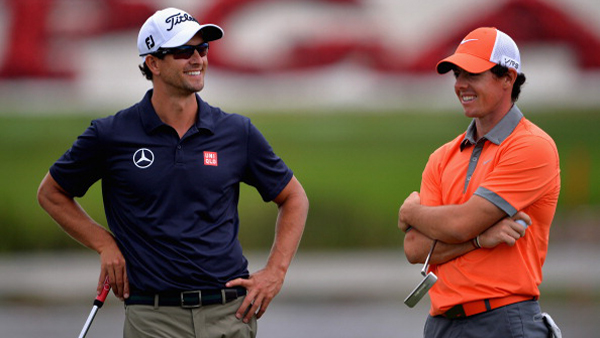 DUBLIN, Ohio – Adam Scott celebrated his rise to No. 1 in the world by rallying to win at Colonial. On the other side of the Atlantic Ocean, Rory McIlroy capped off a busy week in the news by winning for the first time this year at the European Tour’s biggest event in England.

In a golf world that has been without Tiger Woods for the last few months, it gave the sport some life at just the right time.

Scott and McIlroy headline a strong field at the Memorial that includes nine of the top 12 players in the world, most of whom have never had a chance to share a winner’s handshake with tournament host Jack Nicklaus behind the 18th green at Muirfield Village.

The Memorial typically has one of the best fields among PGA Tour events, and it signals the start of a big summer in golf – the U.S. Open at Pinehurst No. 2 in two weeks, a month ahead of the British Open and the PGA Championship right behind it.

Woods, a five-time winner of the Memorial, last played March 9 at Doral. He is recovering from back surgery and has not indicated when he will be able to return, though it’s virtually certain he won’t be at the U.S. Open.

Nicklaus said Woods called him Wednesday morning to wish him well and offer his regrets for not playing, which Nicklaus said was a “very, very nice call.”

“He was saying that he felt bad about not being able to be here,” Nicklaus said. “He said he’s doing well, progressing well, and he’s looking forward to getting back into the game. He misses it. I just pass that on.”

Golf had been missing some excitement in his absence. It has been a peculiar year in which hardly any of the top players have won – until last week.

In 28 events on the PGA Tour this season, Scott was only the third winner who was among the top 10 in the world. The others were Zach Johnson (No. 9 at Kapalua) and Matt Kuchar (No. 6 when he won at Hilton Head).

Scott nearly missed the cut at Colonial, and then closed strong on the weekend. Not since Vijay Singh in 2004 at the Canadian Open had a player won the week after he became No. 1 in the world for the first time in his career.

“It’s satisfying, absolutely,” Scott said. “But I think all the things I did leading up certainly helped put me in the right mindset to play well last week, and it took a couple of days for it to show up really on the weekend. But that’s when it counts. … Getting to No. 1 was such a journey and so much work went into it. I wasn’t going to settle for just staying there for a week.”

With his win, Scott is assured of staying No. 1 when he gets to the U.S. Open.

McIlroy was equally intriguing. He started his week at Wentworth by announcing that he had broken off his engagement with tennis star Caroline Wozniacki, right after the wedding invitations had gone out in the mail. McIlroy then birdied his last two holes and won the BMW PGA Championship.

It was an important win for the former No. 1 and two-time major champion. He had not beaten a field that deep and strong since Dubai at the end of 2012, the sensational year that took him to No. 1 and made it look as though he would stay there.

Since then, he has gone through an equipment change and a management change. And right when it looked as though his game was trending in the right direction, he went through a public breakup of what had been a very public relationship.

McIlroy declined to answer one question about newspaper reports that he split up with Wozniacki over the phone saying that he was only talking about his golf. And with that win at Wentworth, golf became a fun topic of conversation again.

He had squandered good chances in Abu Dhabi and the Honda Classic, all while posting a string of top 10s. For him to win at Wentworth with that much scrutiny on his personal life gave him a life.

“I think I showed quite a lot of mental strength or focus or whatever you want to call it last week during the whole tournament,” he said. “I think mentally, it gave me a lot of confidence knowing that when I did get myself into contention, I could close it out, which I wasn’t able to do at Honda.

“And yeah, it gives me a lot of confidence going to the second half of the season.”