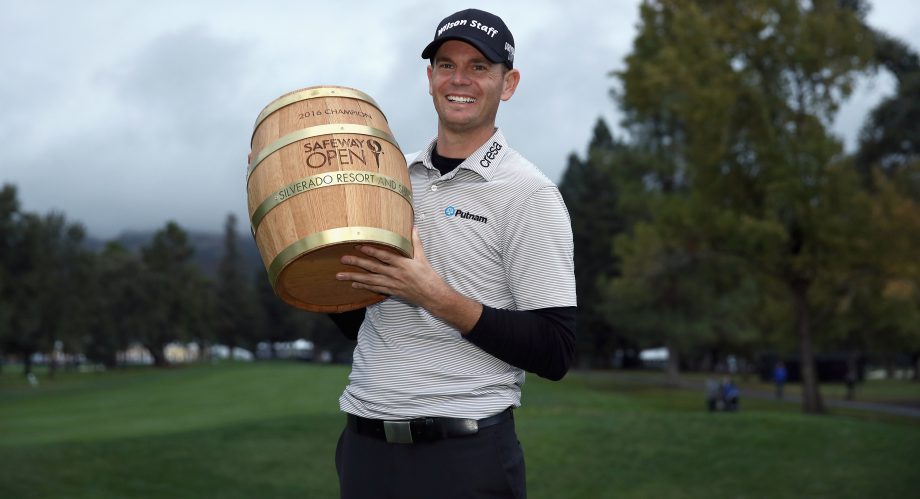 NAPA, Calif. – Right when Brendan Steele thought he might have a chance to win at Silverado, all he could think about was how he lost.

A year ago, Steele had a 54-hole lead in the PGA Tour’s season opener when he made a sloppy bogey on the 12th hole, shot 40 on the back nine and threw it away. He was two shots behind on Sunday in the Safeway Open with little room for error when he three-putted No. 12 for bogey and figured he was done.

“I thought that was it for me,” Steele said. “I thought I would have to do something special. Last year, I tried not to make mistakes.”

This time, he made birdies.

Steele overcame a four-shot deficit in the final round, closed with three straight birdies on rain-soaked Silverado for a 7-under 65 and won by one shot over a faltering Patton Kizzire. It was Steele’s first victory in 141 starts on the PGA Tour dating to his rookie season when he won the Texas Open.

“This is a little bit of redemption from last year,” Steele said. “It’s nice to close it off this way.”

It was a tough ending for Kizzire, who had a one-shot lead going into the final round and looked like a winner when he stuffed his tee shot into 2 feet for birdie on the 11th hole for a two-shot lead.

He struggled to hit fairways the rest of the way, and while he dropped only one shot on the 12th, he couldn’t keep Steele from gaining ground.

“You’ve got to really make something happen, especially when the conditions are soft,” Steele said. “I wanted to be aggressive and I didn’t want to just kind of coast in and just make sure that I had a decent week.”

He had a great week, which sends him back to the Masters for the first time since 2012.

Kizzire drove left into the base of trees on the par-5 16th and had to chip out sideways, eventually making a 15-foot par save from the bunker. With a wedge on the 17th, he left it short and watched it spin back off the green, forcing him to save par again. His final chance was to birdie the final hole and force a playoff. He drove left again, had to lay up and then missed the green with a 9-iron and failed to chip in. Kizzire closed with a 70.

“It was intense,” Kizzire said. “I didn’t finish it off. I’m really disappointed, but I played well. It’s a building block, for sure.”

Johnson Wagner stayed close the entire back nine but had to settle for pars over the final eight holes. He closed with a 70 and tied for third with Paul Casey (69), former Cal star Michael Kim (67) and Scott Piercy (70).

Casey has finished no worse than fourth in his last four tournaments dating to the FedEx Cup playoffs.

“So close, isn’t it?” Casey said. “I mean, I played great. I had another wonderful week.”

Steele, who finished at 18-under 270, won for the first time since the anchored stroke for long putters was outlawed at the start of the year.

He made the switch right after the new rule was proposed in 2014, and while he putted well at times, he still had doubts he could make the big putts when they mattered. Sunday at Silverado answered those questions, along with getting rid of that sour memory from last year when he made five bogeys in six holes on the back nine.

“You don’t often get that chance in life to really redeem yourself in the same way at the same place, and to basically do just the opposite,” Steele said.

The final round was delayed two hours by rain that began soaking Silverado on Friday and led to delays the rest of the way. The third round was not completed until Sunday morning, and Kizzire made a birdie on the final hole for a 66 to take his first 54-hole lead.

And for the longest time, he made it last.

Piercy fell back with a pair of bogeys at the end of the front nine. Casey also dropped careless shots. Phil Mickelson had his chances, too.

In his first domestic fall PGA Tour event in a decade, Mickelson was poised to make a charge on the back nine until missing too many chances. He closed with a 67 and tied for eighth. Mickelson has finished in the top 10 in one-third of his 549 career starts on tour.

Kizzire did well to stay in the game. After his bogey from a fairway bunker on No. 12, Kizzire holed a 15-foot par putt on the 14th after driving under a tree, made another 15-footer on the par-5 16th and a nervy 5-footer for par on the 17th to keep his hopes alive. He just couldn’t make birdie, and it cost him.

Mackenzie Hughes of Dundas, Ont., finished with a share of 13th in his debut as a PGA Tour member after graduating from the Web.com Tour. The Team Canada Young Pro Squad member collected eight birdies on the day to close with a 4-under 68 after three consecutive rounds of 69.