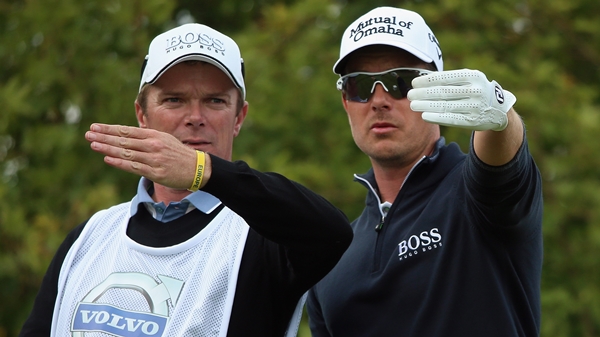 Stenson sealed the win when his wedge shot into the 17th green spun back into the hole for birdie on the London Club course. He finished with an eagle and six birdies on the final day of round-robin play and will play fellow Swede Jonas Blixt in the quarterfinals on Saturday. Thongchai, last year’s runner-up, was eliminated.

In the other quarterfinals, Victor Dubuisson of France faces Mikko Ilonen of Finland and Joost Luiten of the Netherlands takes on Pablo Larrazabal of Spain.

“It was getting a little bit more interesting and while I didn’t hit the best approach with my second into 17, I thought if I could get my lob-wedge to spin back it might be close. But then it was a bonus and quite spectacular when it went into the hole,” Stenson said.

Luiten, was overlooked for European Ryder Cup selection in favor of Lee Westwood, had been 3 down to McDowell after eight holes before going ahead for a first time with a birdie at 17 and then also managing to birdie the last.

“It is always hard when you are 3 down after eight holes but I had plenty more holes and I managed to get back on my game and hit some good shots,” Luiten said.

Reed, who was undefeated in the recent Ryder Cup, was 2 up after just four holes and then moved to 4 up with a birdie at 12.

“It feels good to win as today I made a lot of clutch and solid putts,” he said. “This is one of those events I’ve always wanted to play. I watched it last year on TV back home. Justine, my wife, goes, `I think we need to play there next year or whenever we get a chance.’ And luckily we got an invite this year and I couldn’t pass it up.”

Blixt defeated England’s Paul Casey in a playoff after their match ended all square. Italy’s Francesco Molinari won his first match in defeating Coetzee 2 and 1, but the South African still finished second in his group behind Stenson.