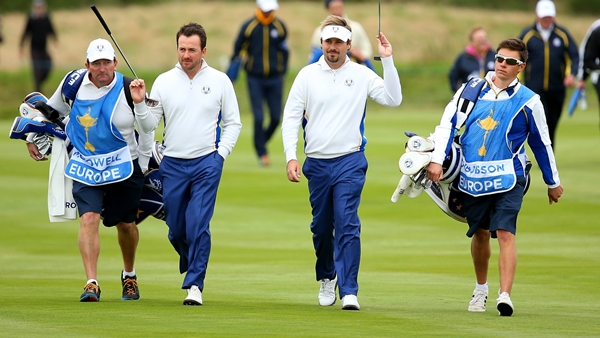 GLENEAGLES, Scotland – Henrik Stenson had different playing partners in all five of his team matches at the Ryder Cups in 2006 and `08.

He looks to have found a keeper at Gleneagles.

Stenson combined with close friend and neighbor Justin Rose on Friday to win two points for Europe on the first day of the 2014 Ryder Cup, helping the team secure a 5-3 overnight lead.

Rory McIlroy and Sergio Garcia, ranked No. 1 and 3 in the world, were widely viewed as Europe’s powerhouse combination this week but now there’s a different duo for the Americans to worry about. Unsurprisingly, Rose and Stenson were paired together for Saturday’s morning fourballs, too, and have expressed a desire to play all five matches.

Rose’s reliability makes him the ideal partner, as Ian Poulter discovered in 2008 and ’12 when the English pair won four of their five matches. Poulter, the Ryder Cup’s ultimate showboater, garnered most of the headlines then but don’t underestimate the importance of Rose’s steady influence.

“He’s a solid player all around,” the Swede said. “He’s got a sharp short game … made some crucial putts and he was driving the ball nicely, as well. So if you’re out there with no real weaknesses, then it’s hard not to produce some good golf.

“I could have found worse partners, I promise you.”

Stenson and Rose were bumping fists all day on the PGA Centenary course as they rolled in a combined 11 birdies in a 5-and-4 win over Bubba Watson and Webb Simpson in the morning fourballs and a 2-and-1 victory over Hunter Mahan and Zach Johnson in the afternoon foursomes.

They exchanged a warm embrace on No. 17 after Rose’s birdie sealed their second point of the day under gloomy evening skies. It is a friendship born from living within 50 yards of each other on a street in Lake Nona, Orlando.

They have kids of a similar age that get on. Their caddies are friends. They travel to PGA Tour events together. Their games are pretty similar, too.

All in all, they are a natural fit – and it’s a combination that won’t be easily penetrated by Bubba Watson and Matt Kuchar on Saturday morning.

“He stays focused the whole day, just like Ian does,” Rose said of Stenson. “He’s a partner you can rely on. If you miss a shot, you always feel like he’s there and he’s got your back, and I think that’s what you want from a partner.

“If you believe in their game, it makes a massive difference.”

It is the first time a European partnership has won both matches on the opening day of the Ryder Cup since Colin Montgomerie and Padraig Harrington in 2004.

“They have a really good dynamic,” Europe captain Paul McGinley said. “These two guys are together for a particular reason. It’s based on my understanding of them as people as well as golfers.”

The modest Rose, who took his overall record across three Ryder Cups to 8-3-0, rejected talk that he was now Europe’s unofficial “team leader.”

But in three sessions, McGinley has twice put Rose and Stenson as Europe’s first pairing. The atmosphere was electric on the first tee Friday as the opening fourballs match got under way amid soccer-style chanting. Simpson skied a shot that traveled 190 yards, barely reaching the fairway. Watson found the rough, while Rose and Stenson found the middle of the fairway.

It was Rose’s first experience of playing at home in a Ryder Cup and he loved it.

“Just looking down the first fairway and seeing 10, 20 people deep from tee to green was just an amazing sight,” he said. “First morning, first shot, the anticipation, the crowd, the build-up, first tee on a Ryder Cup Friday morning, it’s just amazing.”

Rose was stung on his right thumb by a bee as he searched for his ball in a water hazard on No. 9. “It was a well-deserved sting because I hit a terrible shot,” he said.

As the Americans discovered, he didn’t hit many others.