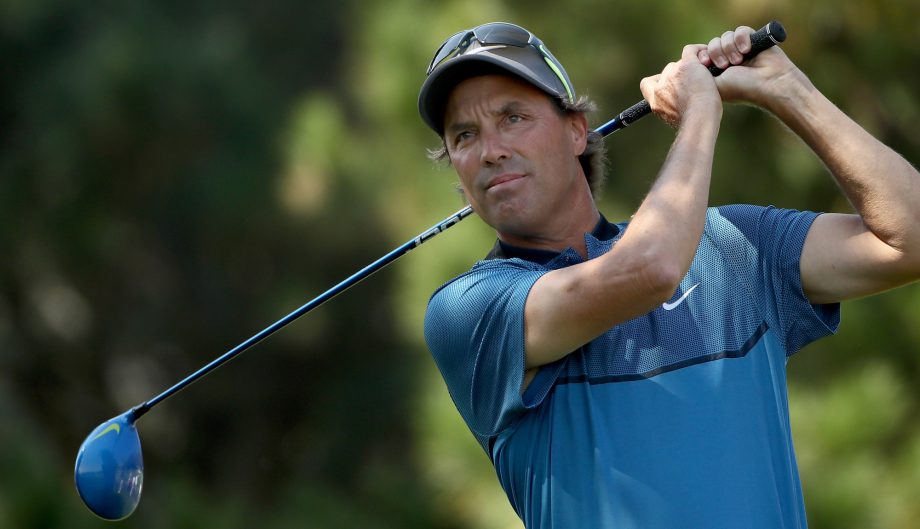 DULUTH, Ga. – Stephen Ames shot a 4-under 68 on Saturday to take a one-stroke lead over five players into the final round of the PGA Tour Champions’ Mitsubishi Electric Classic.

Ames had five birdies and a bogey at TPC Sugarloaf to reach 9-under 135. The 52-year-old naturalized Canadian is winless on the senior tour after winning four times on the PGA Tour.

“I’m not anxious, not anxious at all,” Ames said. “I’m very comfortable right now in the situation. The main thing that I’m really comfortable about is how I feel about my golf swing and being a lot more in control of my anxiety and my feelings and all that when I’m playing.”

First-round leader Bob Tway followed his opening 65 with a 71 to drop into a tie for second with Kenny Perry (64), Billy Andrade (66), Brandt Jobe (68) and Kevin Sutherland (69). Perry rebounded from an opening 72.

“When you open up with 72, you’re teeing off the back nine first and I was just kind of in the rocking chair kind of deal, what I call it where I’m just kind of free-wheeling out there and just playing golf free and easy,” Perry said.

A streak ended.
A record was set.
Monster putts dropped.

Miguel Angel Jimenez (68) and Marco Dawson (68) were 7 under. Jimenez won in 2014 at TPC Sugarloaf and is coming off a victory in the Mississippi Golf Resort Classic.

John Daly topped the group at 6 under, bouncing back from a first-round 73 with a 65 – matching his best senior round.

Defending champion Woody Austin was 5 under after a 70.

Bernhard Langer bogeyed the par-4 18th for a 73, ending his tour-record streak of par or better rounds at 36. The 2013 tournament winner was tied for 21st at 4 under.