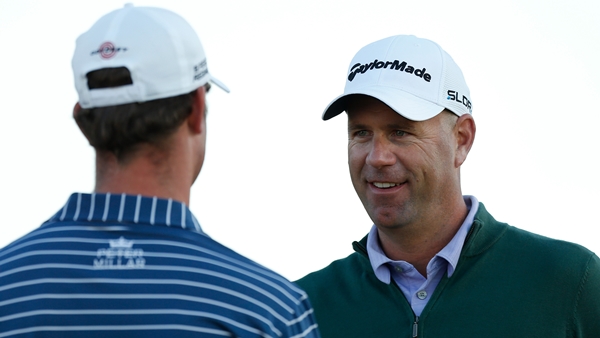 LAS VEGAS – Stewart Cink birdied seven of the final 11 holes Thursday for a 7-under 64 and a share of the first-round lead with Martin Laird in the Shriners Hospitals for Children Open.

Cink had a bogey-free round at TPC Summerlin in his first start since dropping out of the FedEx Cup playoffs after the second event. He won the last of his six PGA Tour titles in the 2009 British Open.

“I have to be honest, through seven holes I had seven pars and it didn’t look like anything special out there except a whole lot of grazed putts. I just kind of was patient and waited for a good stretch, and a good  stretch happened.”

Laird also had a bogey-free round. He played the front nine in 5-under 30 and added birdies on Nos. 15 and 18, holing a 50-foot putt on the last. The Scot won the 2009 event and lost in a playoff in 2010 when Jonathan Byrd made a hole-in-one on the fourth extra hole.

“I missed a bunch of opportunities on the back nine, putted great on the front and hit it actually better on the back than I did the front nine, just kept missing 8-, 10-footers,” Laird said. “Then I said to my caddie walking up the last, watch, `This will be typical, I’ve just missed 8-, 10-footers and I’ll probably make this 50-footer.’ And I did, so it was just one of those days, and it was nice to see that one go in.”

Scotland’s Russell Knox was third at 66. He played his first 11 holes in 7 under, dropped strokes on Nos. 5 and 6 and closed with a birdie on No. 9.

“Got off to a good start, made a nice putt on the first hole, and the front nine I played so well,” Knox said. “I hit it good, putted unbelievable. Just got a little ahead of myself, started thinking about that magic number a little too early.”

Lyle is making his second PGA Tour start since a recurrence of leukemia some 18 months ago. The Australian tied for 31st last week in the season-opening Frys.com Open in Napa, California.

“It was a good round today,” Lyle said. “Got off to a bit of a shaky start, but I rolled some putts in and just kept myself out of trouble, which is a nice thing to do.”

“I’ve got a job to do and I’ve got to try to make as much money as I can to try and regain my playing privileges,” Lyle said. “I’m starting the year just like everybody else. I’ve probably got less events than other people have got to play, but the goal is exactly the same, go out there and make as many cuts as you can, finish as high as you can on the leaderboard, and great play takes care of a lot of issues.”

Canada’s Adam Hadwin is tied for 10th after opening with a bogey-free 4-under-par  67.

FedEx Cup winner Billy Horschel had a 71. At No. 13, he’s the top-ranked player in the field.

Frys.com Open winner Bae Sang-moon also had a 71, as did Canadian Nick Taylor.