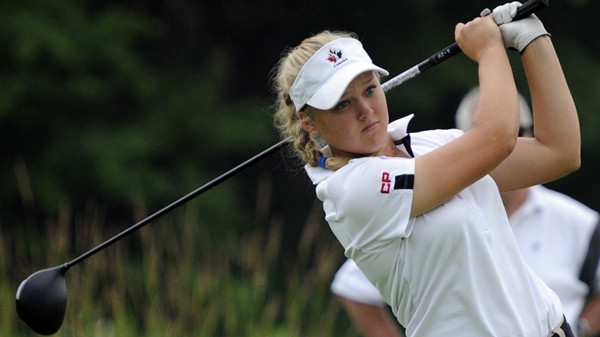 GLEN COVE, N.Y. – Australia’s Su-Hyun Oh shot a 4-under 66 on Monday in the U.S. Women’s Amateur to take the first-round lead in stroke-play qualifying.

The 18-year-old Oh had six birdies and two bogeys at Nassau Country Club. The top 64 after the second round Tuesday will advance to match play.

“I’m playing quite solid,” said Oh, a quarterfinalist last year at the Country Club of Charleston in South Carolina. “Just giving myself a lot of opportunities and making a few.”

Eighth in the world amateur ranking, Oh matched the women’s course record. She holed out from 40 feet for birdie from off the green on the par-4 11th.

Sixteen-year-old Hannah O’Sullivan of Paradise Valley, Arizona, was a stroke back. She birdied four of her last six holes and needed only 25 putts.

“I just started hitting the ball better,” O’Sullivan said. “I was putting great all day and just gave myself better opportunities and drained the putts.”

Megan Khang, also 16, of Rockland, Massachusetts, opened with a 68.

Brooke Henderson of Smiths Falls, Ont., who was low amateur in the U.S. Women’s Open, shot 71 and was tied for 12th with Brittany Marchand of Orangeville, Ont.

Anne-Catherine Tanguay of Quebec City was 3-over after the opening-round – she fired a 73.

Defending champion Emma Talley, the 20-year-old University of Alabama player from Princeton, Kentucky, was tied for 86th at 76.