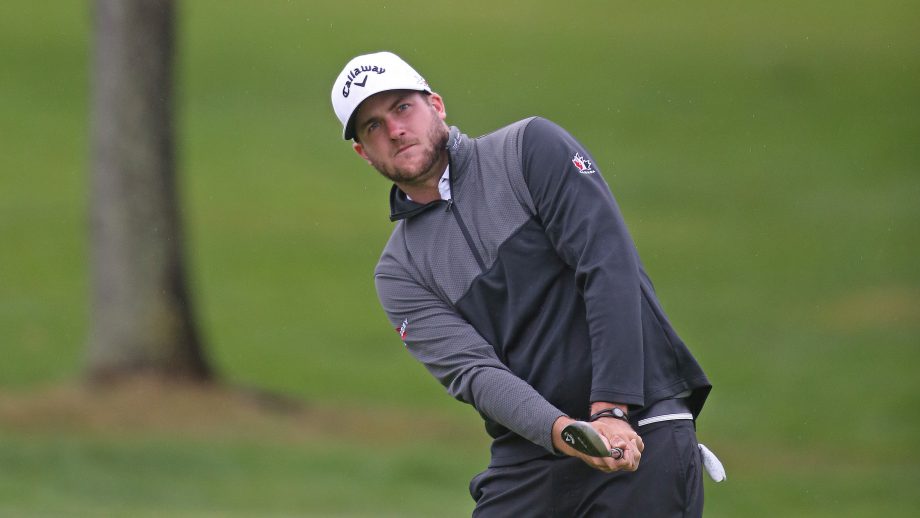 Windsor, Ontario, Canada—A trio of players sit one-stroke back of Mark Anguiano, including Canadian Taylor Pendrith, who set the course record on Thursday with a 62. While the 27-year-old was unable to replicate his round-one form, Pendrith made 5 birdies to shoot 68 and will play in the final pairing for the first time this season at the Windsor Championship.

“It was pretty difficult out there I thought. I stayed patient all day because I didn’t have too many great looks at birdies, but I birdied the par 5s and made some on the back 9, which I think is the harder nine, and it turned out to be a good day. It was a grind, but I got in at 3-under, so I’m pleased,” said Pendrith.

Canadian Michael Gligic continued to impress with his Pendrith-inspired claw grip with the putter. Gligic followed up his first round 64 with a four-birdie front 9 to make the turn in 33 strokes. The 28-year-old made 9-consecutive pars on the back side to sign for 68 and heads into the weekend tied for 8th.

For the second consecutive round, only a single square appeared on Mark Anguiano’s scorecard, who followed up his first-round 63 with a 66 to take a two-stroke lead into the weekend at Ambassador Golf Club.

Anguiano had just finished the 16th hole when adverse weather struck on Thursday evening, forcing his group to return to the course Friday morning to complete their first round before beginning the second loop.

Upon his return, the Bellflower, California native birdied the 17th hole and found himself at 8- under for the tournament, just one-stroke off Taylor Pendrith and Theo Humphrey’s lead.

“I made about a 30-footer on my second-last hole in the first round this morning, and then made par on the last, so it was really nice to start that way,” said Anguiano. “I was pretty much on cruise control the rest of the day.”

After making birdie on his fourth hole of the second round, Anguiano rebounded from a 6th hole bogey with back-to-back birdies on 7 and 8 to make the turn in 33 strokes. The 25-year-old carded a clean back nine with three birdies to sign for 66.

“It was a good day, I hit it really well off the tee, and I needed to today, it was tricky, especially with the wind change coming from the North,” said Anguiano. “The pins were pretty tucked, so it was tough to get close, so I did well and made some long putts.”

Early in the season, Anguiano was getting starts on the Mackenzie Tour due to his Web.com Tour status. Recent events have quickly changed that; a T23 finish in Victoria at the Bayview Place DCBank Open presented by Times Colonist and a T6 finish at the GolfBC Championship, which included a first-round 62, gives him full status as he sits comfortably in 25th spot on the PGA TOUR Canada Order of Merit.

“I like the courses up here, I think they fit my game pretty well,” said Anguiano. “Most of the time you have to drive it pretty straight out here. You don’t really see yourself short sided that often, and because of that, you can make a lot of birdies and you can save a lot of pars if you’re dialed in with the short game.”

Ian Davis played his back nine in 30 strokes, making eagle on both par fives to match Pendrith’s 12-under mark with a second round 64. Meanwhile, Monday qualifier Jake Scott becomes the first player this season to make three eagles in a single Mackenzie Tour round, shooting a 64 to match Pendrith and Davis’ two-day totals.