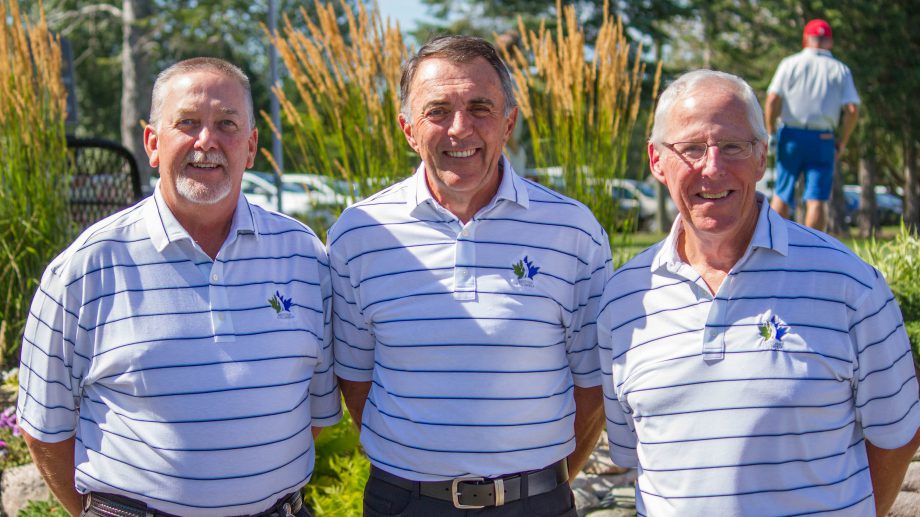 The trio of Doug Roxburgh (Vancouver), John Gallacher (Burnaby, B.C.) and Al Jensen (Nanaimo, B.C.) posted a combined second-round score of 2-over-146 to capture the Phil Farley Trophy with a total of 297 (+9).

It was a close finish between Team British Columbia and Team Alberta, which was comprised of John Festival (Calgary), Brian Coston (Calgary) and Ken Griffith (Red Deer, Alta.). The Alberta trio, who are defending champions,finished a single-shot back of Team British Columbia, sharing runner-up honours with Team Quebec, comprised of Shawn Farrell (St-Anne-de-Bellevue, Que.), François Bissonnette (Mirabel, Que.) and Michel Roy (Québec, Que.). Team Alberta and Team Quebec finished with a total of 10-over-298.

Team British Columbia member and Canadian Golf Hall of Famer, Doug Roxburgh, walks away from the second round with his team winning the inter-provincial competition and holding the lead in the Super Senior Division.

“It’s great,” when asked how it feels to be leading the Super Senior Division, “I just want to go out and play golf while representing B.C. and see how our team did, and now we have the individual side of it, and so we just keep plugging away.”

The Vancouver native leads the Super Senior by 5 stokes after carding a 1-under-71 on Wednesday to sit 1-over for the tournament.

“I played fairly steady and missed a couple of short ones, but other than that you have to be pretty happy with it, I’ll take a 71,” Roxbugh laughed.

The 2014 Canadian Men’s Senior champion holds a five-shot lead on Lars Melander from Oakville, Ont. and Lance Lundy from Pemberton, B.C., who share second with a total score of 150 (+6).

Brady Exber took the solo lead Wednesday in the Senior Division after recording a tournament low round of 4-under-68.

The Las Vegas native teed off on hole 10 and fired two birdies against two bogeys on his front nine making the turn at even for the day. He continued to record four more birdies on the back nine to take a three-shot lead.

“It’s always good to make six birdies,” Exber smiled. “I had two mistakes, I bogeyed 17 and just missed the green a little bit and flubbed a chip. I three putted 18, that was very disappointing.”

Exber enters the third round Thursday without having made a bogey on the front nine.

Peter Detemple from Lexington Park, MD., initially from Vancouver, moved one spot back into second after sharing the lead with Exber after Tuesday’s round. Detemple carded another 71 to sit 2-under for the tournament.

Not far behind is 2017 Canadian Senior champion Gene Elliott who fired a 3-under 69 to sit alone in third, just one stroke behind Detemple.

A total of 74 players finished 156-or-better to advance past the 36-hole cut. The third round will begin Thursday at 8 a.m. ADT.