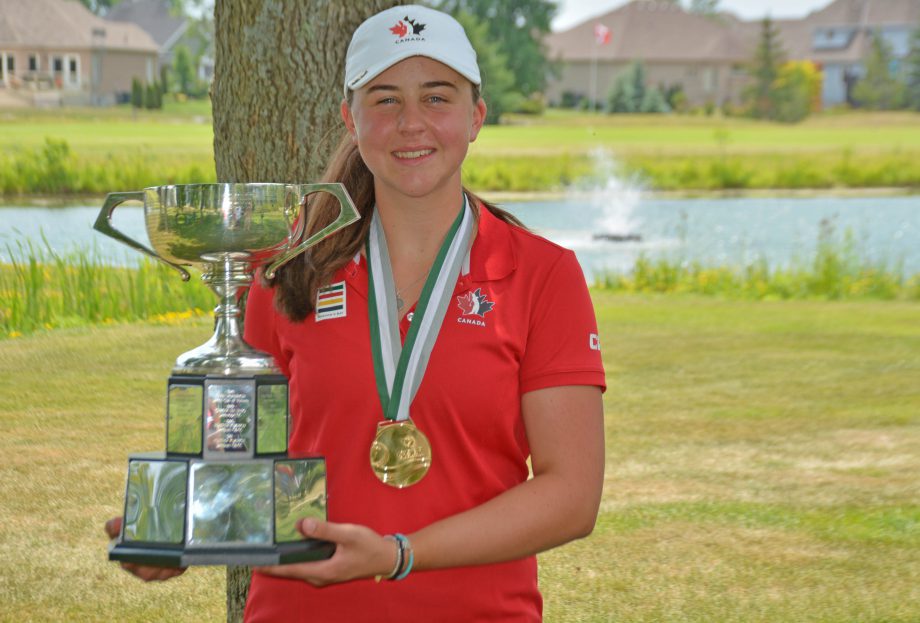 BATH, Ont. – Heading into the final round of the 2016 Investors Group Ontario Junior Girls’ Championship at Loyalist Country Club, defending champion Chloe Currie of Mississauga, Ont., held a three-shot lead. That cushion proved to be enough as the Team Canada Development Squad member shot 1-over 73 to secure the win.

The member of Mississaugua Golf & Country Club made one bogey on the day on her first hole, but went on to par the remaining 17 holes. The 16-year-old Currie’s consistent brought her four-day tournament total to two-under (70-73-70-73-286).

“It feels incredible to defend the Ontario Junior Girls’ Championship. I was dreaming about this coming into the week and it is just awesome that I was able to win it twice!” Said Currie.

Currie recognized that winning back-to-back titles is a special feat and that she has joined some impressive company. “It is incredible, it is such an inspiration to join the great names to have won multiple times. Hopefully, I will be able to have my own accomplishments like theirs.”

When asked about the strongest part of her game, Currie pointed to her short game. “My chipping and putting were really good this week. I got up and down many times and gave myself great chances.”

London, Ont., natives Isabella Portokalis and Ellie Szeryk finished in a tie for second. Portokalis – the leader after the first two rounds – had a rough start to the day finishing 5-over on the front nine. However, the West Haven Golf & Country Club and Team Ontario member, rebounded nicely on the back nine shooting 4-under to complete the round with a 73 to finish 3-over 291. Szeryk, 14, entered the day in second, three shots back of Currie, but was unable to make up any ground on the leader.

Rounding out the Top-5 was a tie for fourth between Hornby’s Alexandra Naumovski (72-72-76-74-294) and Ridgeway’s Madeline Marck-Sherk (79-74-72-69-294) at six-over. Naumovski prevailed in a playoff and will join Currie and Portokalis to represent Team Ontario at the Canadian Junior Girls Championship, Aug. 2-4 at The Links at Penn Hills in Shubenacadie, N.S.

Additional information, including the final leaderboard, can be found here.