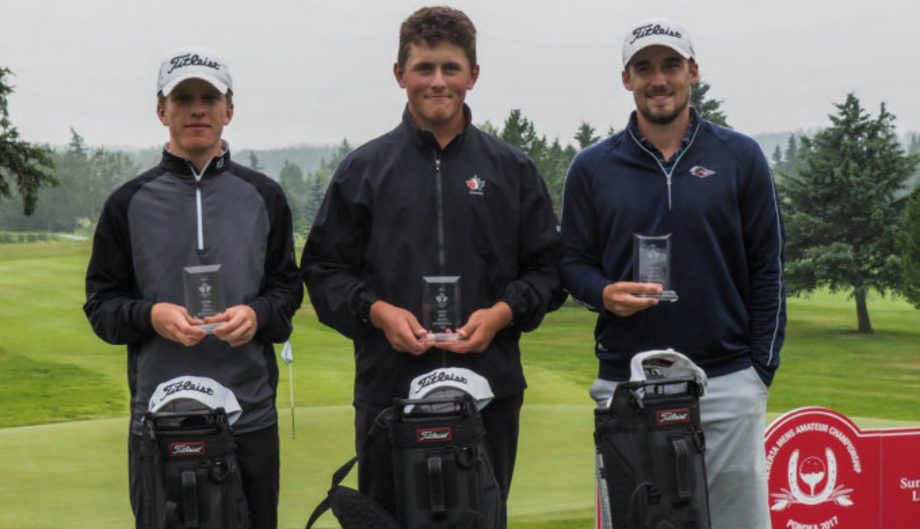 It was a dramatic finish to the 2017 edition of the Sun Life Financial Alberta Men’s Amateur Championship. Wind and rain made for tough conditions at the Ponoka Golf Club as sixty of the province’s best amateur golfers vied for their spot into the national championship. 2015 champion Brett Hogan defeated Max Sekulic on the second playoff hole in a thriller finish.

Hogan got off to a hot start again as he started the day two shots off of Sekulic’s lead. “I got off to a great start. I knew Max was going come out and play well today. My goal was to play my own game and get some chances for birdie. On the front, I did a good job of keeping the ball below the hole”, said Hogan. He went out bogey-free in 32 strokes and after birdieing the tenth hole he had it to 16-under-par for the championship before conditions deteriorated. “On the back, I played decently solid but got a little shaky with the putter and the conditions got worse and a little tougher out there.”

Sekulic fought back hard and made an incredible 20-foot bomb for birdie on the final hole in front of the crowd. Hogan said, “I had a feeling he (Sekulic) was going to make it. He’s a great putter. I knew I was going to have to make mine and unfortunately, I lipped out my par putt. You’ve got to move on.” After 72 holes the pair were tied at 12-under-par and were headed to a sudden death playoff starting on the tenth hole.

Both players scrambled for par on the par 5 tenth and they headed back to the 18th where it would all be settled. Hogan tugged his drive just left and had two trees blocking his second shot. “I had 95 yards and had to keep it pretty low. I’ve practiced shots like that before. Hitting different clubs from about a hundred yards and I actually had that shot earlier this week in the second round so I knew what to do. I just hit an eight iron from back in my stance and just hoped it would work out as well as it did.” His ball rolled to four feet and when Sekulic missed his birdie attempt, Hogan stepped up and made his second chance count.

Hogan becomes the 19th person in the championship’s history to win the Alberta Amateur multiple times. He said after the round that “it means a lot… it meant a lot to get the first one and this probably means just as much or maybe even more. It’s not easy to win these things and this is definitely one of my favourite tournaments all year.”

Hogan, Sekulic and Graf form the Alberta Willingdon Cup team that will represent the province at the Canadian Men’s Amateur Championship to be conducted at The Toronto Golf Club & Islington Golf Club in Mississauga, ON, August 7-10th. Hogan earns the final spot on the 2018 Pacific Coast Amateur Championship Alberta Morse Cup Team.