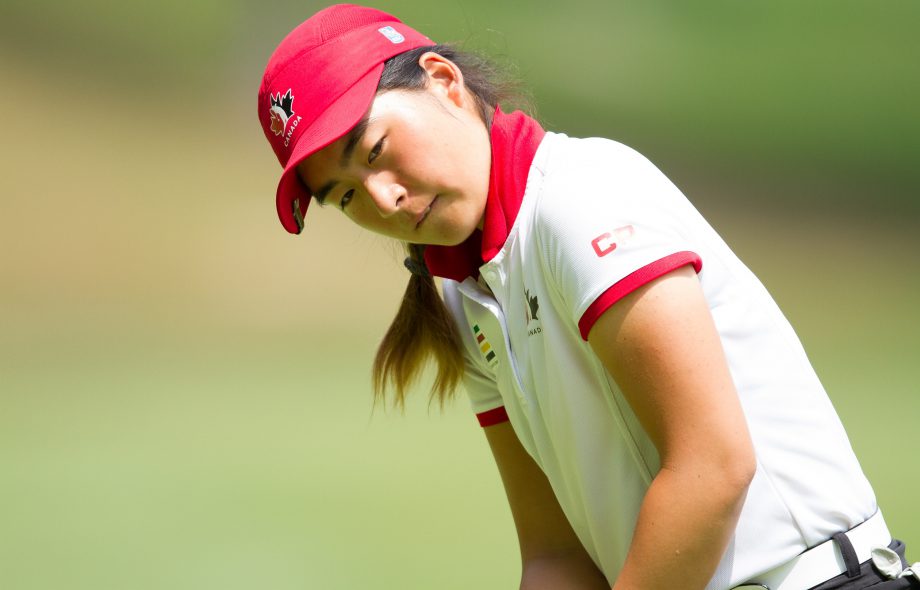 SHUBENACADIE, N.S. – The second round of the 2016 Canadian Junior Girls Championship saw hard greens soften under a dewy morning at the Links at Penn Hills. Victoria’s Naomi Ko carded a 5-under 67 en route to extending a three-stroke advantage.

The Team Canada National Amateur Squad member carded a bogey-free second round to extend her streak of holes without a blemish to 31. She took quick possession of the lead following back-to-back birdies on holes 3 and 4 before adding another on the par-3 No. 8. A 2-under 34 across the back nine moved Ko to 6-under through 36 holes.

“The weather was nice and the greens were holding up better today, everything was pretty solid,” said Ko. “My ball-striking was pretty good and I hit a lot of greens which helps. There were a couple of putts that slipped a bit, but I’ll take a 5-under any day.”

Ko is competing in her fifth and final national 18-and-under championship before she loses eligibility in six days. The North Carolina State University sophomore posted a fourth-place finish at this competition in 2014 when it was hosted at Thornhill Golf & Country Club in Thornhill, Ont., and a second-runner-up result last year at Deer Park Golf Course in Yorkton, Sask.

“I’m excited and kind of sad at the same time that it’s my last Canadian Juniors, but I’m just going to try to do my best and hopefully the results will show. I kind of have to get my head out of the scores and focus on my game. Experience helps a lot and being with Team Canada really helps to support me in this kind of environment.”

A six-birdie day propelled Delta, B.C., native Mary Parsons into second-place at 3-under. The 2016 CN Future Links Pacific champion matched Ko’s 67 after draining three consecutive birdies across holes 2 to 4 and then equaling the feat on holes 16 to 18.

Team Canada Development Squad member Chloe Currie of Mississauga, Ont., shot 1-under on the day to finish in a tie for third with Maple Ridge, B.C., resident and fellow 16-year-old Cecile Kwon. Currie carded three birdies and an eagle on the par-5 16th hole en route to her 71. The pair lead the 16-and-under Juvenile division at even-par, while first-round leader Alisha Lau of Richmond, B.C., carded a 75 and is one stroke back.

Parsons, Vancouver’s Tiffany Kong and Hannah Lee of Surrey combined to deliver British Columbia its second inter-provincial team title in as many years. The trio finished the day 3-under to emerge victorious with a team total of 2-over 290 – seven strokes clear of their first-round co-leaders from Team Ontario.

The 2016 Canadian Junior Girls champion will receive an exemption into the 2017 Canadian Women’s Amateur Championship hosted at Cutten Fields in Guelph, Ont., from July 25 to 28.

A total of 70 players finished 172-or-better to advance to the final two rounds of the Canadian Junior Girls Championship. The third round will see the first group tee off from No. 1 at 7:30 a.m. ADT.