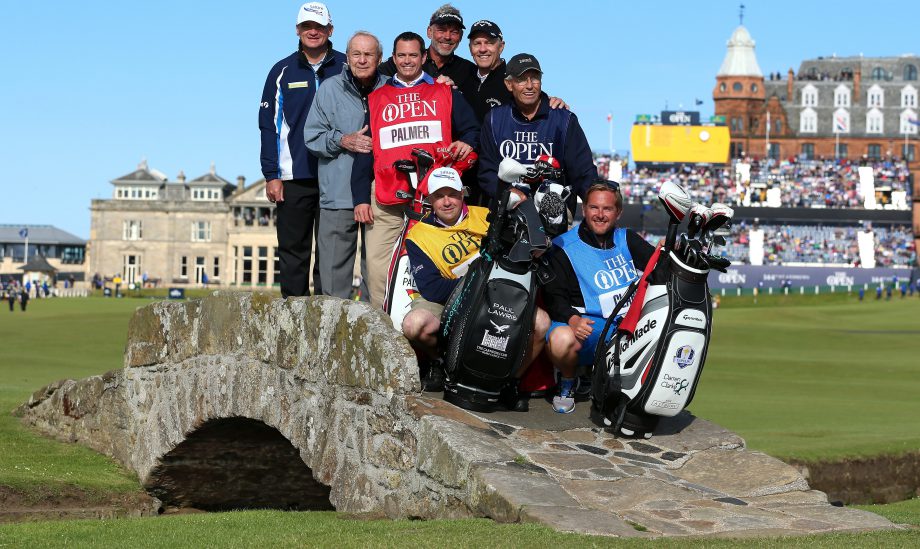 Paul Lawrie of Scotland, Arnold Palmer of the United States, Darren Clarke of Northern Ireland and Bill Rogers of the United States pose with caddies on the Swilcan Bridge during the Champion Golfers' Challenge ahead of the 144th Open Championship at The Old Course on July 15, 2015 in St Andrews, Scotland. (Andrew Redington/ Getty Images)

ST. ANDREWS, Scotland – On a day for reminiscing at the home of golf, a team led by Arnold Palmer captured the Champion Golfers’ Challenge.

The four-hole exhibition on the eve of the British Open pitted squads comprised of past winners, with the best individual score on each hole going toward that team’s total.

The 85-year-old Palmer, who spawned an American invasion with his Open victories in 1961 and `62, hit the opening tee shot for his team Wednesday. He then turned things over to Paul Lawrie, who eagled the second hole and rolled in a long birdie putt on the 18th to give his team – which also included Darren Clarke and Bill Rogers – a 3-under total.

The squads captained by Tony Jacklin, Tom Weiskopf and Peter Thomson also were 3 under. But Palmer’s team won the top prize of >100,000 ($156,452), which will be donated to a charity of their choice, by having the highest average age.

No one seemed too concerned about the scores, however.

There were plenty of laughs and everyone paused for group pictures on the Swilcan Bridge at the 18th hole.