Thomas caps off record week with trophy at Sony Open 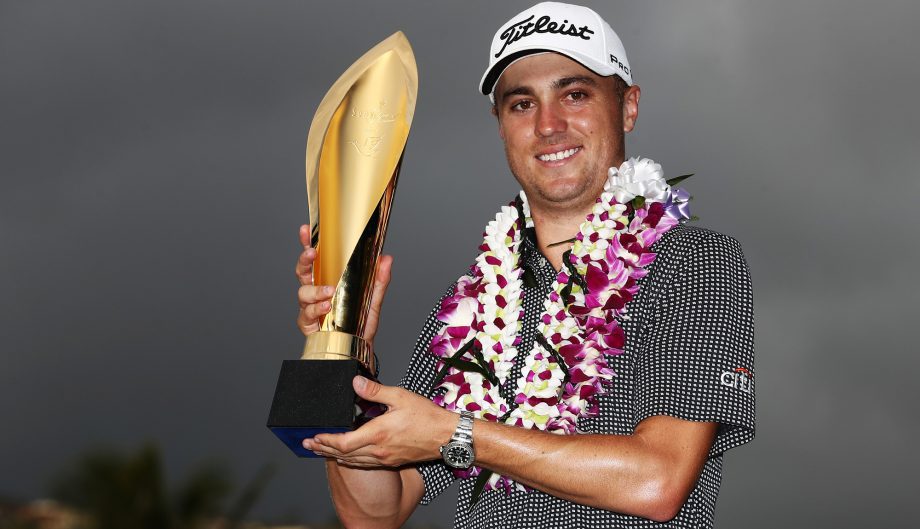 HONOLULU – One last putt. One more record. And two unforgettable weeks in Hawaii for Justin Thomas.

Thomas began the Sony Open with a 15-foot eagle putt on his final hole to shoot 59. He ended it Sunday with a two-putt birdie from 60 feet that gave him yet another entry in the PGA Tour record book for the lowest 72-hole score in history.

His final act was to stand before the members of Waialae Country Club, champagne flute in hand for the traditional toast. Thomas chugged it down, smiled and said to them, “I think I had a glass with a hole in it.”

The 23-year-old from Kentucky gave the best glimpse yet of his potential with a game that was at times overpowering and never more efficient. He closed with a 5-under 65 for a seven-shot victory, which gave him as much satisfaction as his score of 253 to set the record.

Thomas, who won the CIMB Classic in Malaysia last fall, became only the third player since 1970 to win three times in his first five tournaments to start a PGA Tour season. The others were Tiger Woods (three times) and Johnny Miller (twice).

His victory came one week after he won the SBS Tournament of Champions by three weeks at Kapalua.

“It’s been an unbelievable week. Unforgettable,” Thomas said before going to sign his historic card.

Thomas was more nervous than ever when he arrived Sunday from endless mentions that no one had ever lost a seven-shot lead on the PGA Tour. No one got closer than five shots all day, and with four birdies in a five-hole stretch around the turn, Thomas took aim at the record book.

That was his only real challenge Sunday.

“I’m not joking when I say I won the other tournament,” Justin Rose said after a 64 that was only good for second place. “Had he had a bad day, I was there to pick up the pieces. But that was never going to happen. He’s on cruise control right now.”

Rose beat out Jordan Spieth, who also was playing for second place. Spieth shot 63 and finished alone in third.

Mackenzie Hughes, the only Canadian to make the 36-hole cut, shot a 68. The Dundas, Ont., native finished in 27th spot at 11 under.

The first full-field event of the year on the PGA Tour was a one-man show.

“He’s got full control of his game, full confidence, and he’s executing under pressure,” Spieth said. “It’s a lot of fun to see. Certainly stuff that myself and a lot of our peers have seen going back almost 10 years now. He’s certainly showing the world what he’s capable of.”

Thomas joined Ernie Els in 2003 as the only players to sweep Hawaii, and this performance might have been even better. Thomas was 49-under par for his two weeks, compared with Els at 47 under.

He said on Friday that he hasn’t “shown the world my best golf.” He came pretty close these last two weeks.

“I’m not going to sit here and tell you I’m playing OK,” Thomas said. “I would take the golf I played the last few weeks every week I play.”

Thomas, thinking more about the trophy and another record when he started the final round, took no chances early on. He was 1 over through seven holes, making a soft bogey with a three-putt from 45 feet on No. 4 and a tough par save on No. 6, and still no one got closer than five shots.

But when he poured in a 20-foot birdie putt on the eighth, Thomas shifted into another gear. That was the start of four birdies in five holes _ the exception was a birdie putt he missed from just inside 10 feet _ and he stretched his lead to as many as nine shots.

Waialae was vulnerable all week with not much wind, fast fairways and greens that were softer than usual. Thomas produced the eighth sub-60 round in PGA Tour history Thursday. Kevin Kisner had a shot at 59 on Saturday until missing a 9-foot eagle putt on his final hole. And on Sunday, Chez Reavie made a hole-in-one with a 6-iron on the 17th hole that gave him a shot at a sub-60 round. Only a bogey on the sixth hole (he started on No. 10) stopping him, and he had to settle for a 61. That matched the third-best score of the week.

Even in easier conditions, no one played like Thomas.