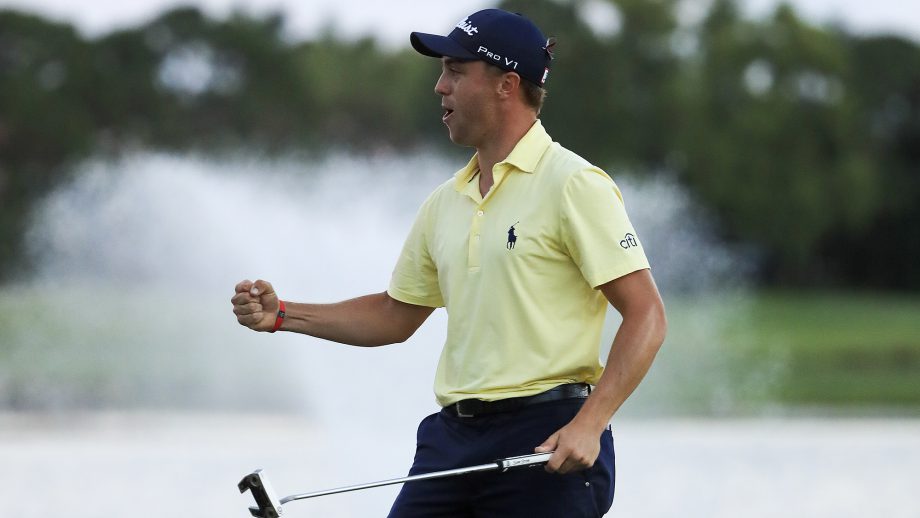 PALM BEACH GARDENS, Fla. – Justin Thomas nearly holed a wedge that got him into a playoff, and then hit 5-wood over the water and onto the 18th green for a two-putt birdie to beat Luke List on the first extra hole Sunday to win the Honda Classic.

Thomas closed with a 2-under 68 and won for the second time this season. He also won in a playoff at the CJ Cup in South Korea last fall.

Thomas and List matched birdies and tough pars over the final eight holes, and List appeared to have a big advantage on the par-5 18th when he hit a big drive that left him a 4-iron he hit onto the back of the green. Thomas was in the left rough and had to lay up instead of taking on the water.

He hit a wedge from 117 yards that landed a few feet in front of the hole and rolled some 6 inches to the side of the cup, settling 2 feet away. It brought to mind Lanny Wadkins stuffing a wedge on that hole to secure a U.S. victory in the 1983 Ryder Cup.

List, going for his first PGA Tour victory, blinked first in the playoff by missing his drive well to the right amid palm trees. He blasted that out left and against the grandstand, and then he watched Thomas take on the water and hit the green in two.

Thomas rapped in a 4-footer for is birdie and the eighth win of his career. It moves him to No. 3 in the world, one spot ahead of longtime friend Jordan Spieth for the first time in their careers.

“It was a hell of a battle out there,” Thomas said. “I stayed very calm all day. It feels awesome to come out on top.”

Alex Noren was tied for the lead playing the 18th and caught an awkward lie from the side of a bunker. He made par for a 67 and finished one shot behind.

Thomas and List finished at 8-under 272. It was the seventh playoff in 15 PGA Tour events this season.

Mac Hughes of Dundas, Ont., and Corey Conners of Listowel, Ont., both shot 73s on Sunday to finish in a tie for 59th at 9 over.

Tiger Woods was briefly within three shots of the lead on the front nine. He closed with a 70 and finished 12th.

Woods made that Sunday red shirt look a little brighter, at least for a while. With an 8-foot birdie putt on the par-4 eighth hole, he momentarily pulled to within three shots of the lead. That only lasted the few minutes that it took Thomas to tap in for birdie on the par-5 third.

Woods made bogey to close out his front nine, and he still was four shots behind until getting swallowed up again by the water-filled closing stretch. He put his tee shot into water and made double bogey for the second straight day, three-putted the 16th for bogey and was out of hope.

“I made a big leap this week because I really hit it well,” Woods said. “I was able to control it, especially in this wind, which is not easy to do.”

Woods led the field in proximity to the hole on his approach shots at just over 29 feet.

Not to be overlooked was Sam Burns of LSU, who last year won the Jack Nicklaus Award as the top college player who received a sponsor exemption. Playing alongside Woods in such a chaotic arena, he was bogey-free for a 68 to tie for eighth. That will get him into the Valspar Championship at Innisbrook in two weeks.

Five players had at least a share of the lead. Only three of them stuck around until the end.

Webb Simpson missed the fairway on the 11th hole and had to lay up instead of taking on the water. That led to the first of three bogeys in a four-hole stretch and sent him to a 72, four shots behind. Tommy Fleetwood was tied for the lead until a three-putt bogey from long range on the 14th, and a bogey from the back bunker on the 15th. A birdie on the final hole for a 69 left him two shots behind.

Noren faded early on the back nine with a three-putt bogey on the 11th and a bad tee shot that led to bogey on the 13th. He rallied, however with birdies on the two of the next three holes and had a chance on the par-5 18th until his second shot got hung up in the thick collar of a bunker. He made par for a 67, and could only watch as List and Thomas finished with birdies.

Thomas made one more that mattered.

“This one is going to sting a little bit,” List said. “But I found a restored passion for what I do out here. I gave it my best effort on every shot.”