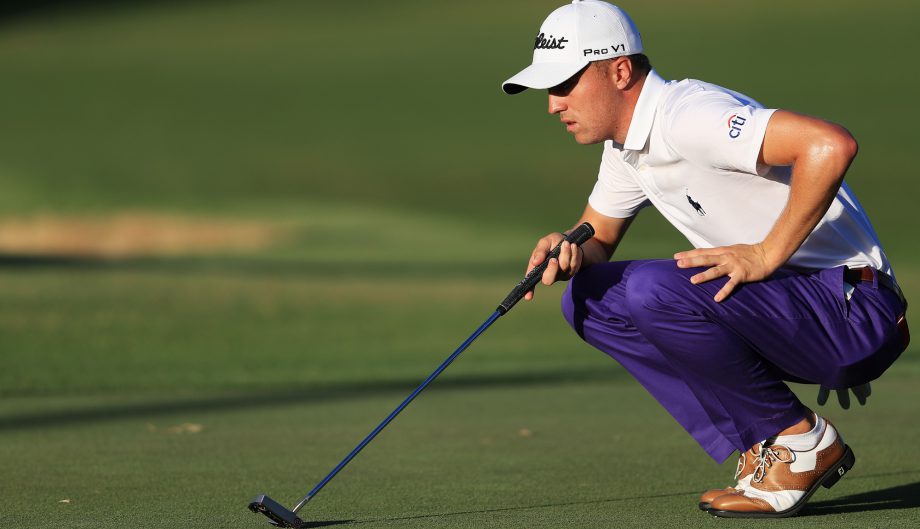 The idea now is to get his name on the trophy.

And with each record, that becomes a little easier at the Sony Open.

Thomas set the course record Thursday at Waialae Country Club with his 59, only the eighth sub-60 round in PGA Tour history. Even then, the 23-year-old from Kentucky was cognizant that the tournament still had three rounds remaining, and he only had a three-shot lead.

He followed that with another burst of birdies around the turn and another eagle on his final hole, punching a 7-iron out of the light rough to run the ball up between two bunkers and onto the green about 8 feet below the cup. He made the eagle putt for a 64, setting the 36-hole scoring record on the PGA Tour at 123.

And now he has a five-shot lead.

“He’s not stopping, as we can see,” said Jordan Spieth, who watched him for two rounds.

Thomas also is not looking behind.

Following a great round with another one is not easy, and the task becomes even tougher when that great round is a 59.

“I didn’t know how I was going to feel,” Thomas said. “I didn’t feel too much today. I just felt like it was another round of golf and I need to try to build on my lead and see how low I could go today.”

He didn’t realize he had set the 36-hole record until the scoring official told him as Thomas was signing his card. He left Friday evening not even aware of another record he had set – best round after a 59.

Jim Furyk (with his record 58), David Duval and Stuart Appleby each hit golf’s magic number in the final round. Of the four other times someone shot 59, the best anyone managed was Paul Goydos (2010 John Deere Classic) and Chip Beck (1991 Las Vegas Invitational), who each had a 68.

Thomas clipped them by four.

Of more importance, of course, is that he stretched that lead to five shots over Gary Woodland. That matched the largest 36-hole lead in Sony Open history by Paul Azinger in 2000 and Brad Faxon in 2001. Both went on to win.

As for that 36-hole record, odds are in his favor.

Three players had shared the record of 124, and all of them went on to win:

– Jason Day shot 61-63 at Conway Farms in the 2015 BMW Championship and won by six shots over Daniel Berger.

This is only his third season on the PGA Tour, though Thomas has been around long enough not to get too far away from his next shot. Sure, he thinks about winning when he knows he’s playing well, like last week on Maui at the SBS Tournament of Champions. He was tied for the lead after 36 holes, went two clear of Hideki Matsuyama going into the final round and won by three.

“You don’t really start thinking about it consistently until probably Sunday if you’re in it,” he said.

At stake is a chance to join Ernie Els as the only player to sweep Hawaii since 1999, when Kapalua became the starting point to a new year.

Mackenzie Hughes of Dundas, Ont., shot a 5-under 65 and is 7 under for the tournament to become the lone Canadian to make the cut. David Hearn of Brantford, Ont., and Nick Taylor of Abbotsford, B.C., both shot 71 and finished 1 under.

Spieth, meanwhile, will probably be happy to get away from his best friend in golf. Spieth has been playing well over two days, and to watch them, his game has not been all that different from Thomas except for the length of some of the tee shots – and the putting.

He has had similar putts for birdie from about the same distance, and sometimes the same line. One guy keeps making them, and it’s not Spieth.

“Just has a really cold putter this week,” Spieth said. “I think it added to the frustration on the green, because the game is looking so easy to him. I felt like I was hitting the ball in the same location, I’m just being outdone on the green. That’s something a little abnormal to me.”

That made Thomas chuckle.

“Now he knows how a lot of people feel,” Thomas said.