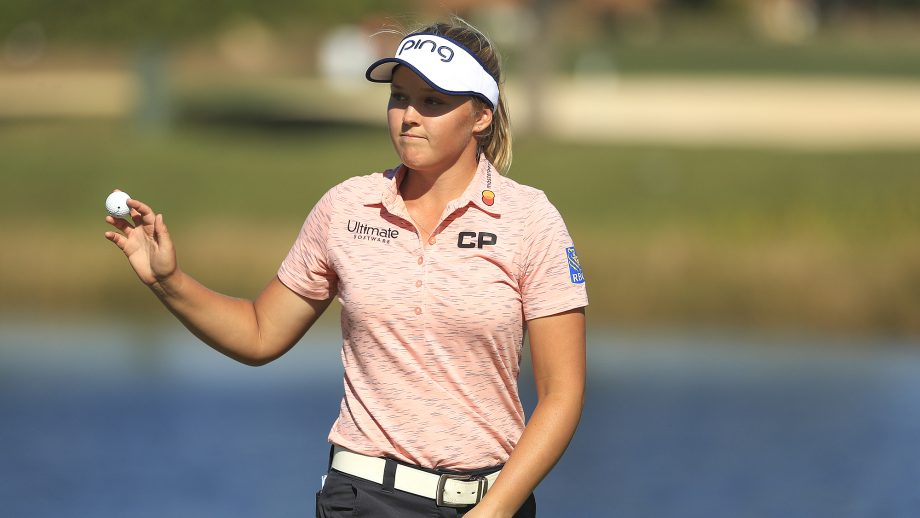 NAPLES, Fla. – Lexi Thompson has control of the CME Group Tour Championship, and Ariya Jutanugarn is in control of just about everything else.

Thompson’s 4-under 68 on Saturday pushed her to 16 under after three rounds of the LPGA’s season-ending event. She moved three shots clear of Nelly Korda and six ahead of Carlota Ciganda at Tiburon Golf Club. Korda shot her second consecutive 67 to get to 13 under, and Ciganda grinded out a 69 to get to 10 under for the week.

Thompson has been nearly flawless this week. Her only dropped shot of the tournament came Saturday when she made bogey at the par-4 fourth hole, then put together five birdies over the rest of her round.

“Golf is all about momentum,” Thompson said.

Right now, she has an abundance of that going for her. For the week, she has 14 birdies, one eagle and the one bogey. She’s been calm and collected with her newly purchased Havanese Poodle around this week, finding a rhythm with an old putter and having her brother Curtis as her caddie.

“I just tried to keep the same attitude as I did the last two days,” Thompson said. “Curtis kept me nice and relaxed. He’s always cracking jokes out there. It’s been a nice relaxing week just having him on the bag and having all my family and friends out here supporting me.”

Brooke Henderson of Smiths Falls, Ont., fired a 69 to finish the day tied for 16th at 5 under.

If Thompson hangs on Sunday, she’ll have her first win of the season.

If Jutanugarn keeps things together, she’ll leave with plenty of prizes as well.

Jutanugarn will start her final round 10 shots back but leading the projected Race to the CME Globe standings and in position to claim the $1 million bonus for winning the LPGA’s season-long points race – which would be her second in three years. Jutanugarn already has clinched player of the year and is nearly mathematically assured of winning the Vare Trophy for the lowest scoring average on tour.

“I did a pretty good job. I didn’t think about that at all,” Jutanugarn said of the Globe race and what’s at stake this weekend. “Yesterday I (thought) about that too much, worrying about that.”

The Vare Trophy isn’t hers yet, but it would take the most improbable of outcomes for that to slip away from Jutanugarn in the final round of the season. The two closest players to Jutanugarn in the season scoring standings are Minjee Lee and Jin Young Ko; either of them would have to beat the world’s No. 1 player by about 30 strokes on Sunday to pass her in the Vare race.

Korda had an eventful day with more birdies than pars – 8-7 – but with three bogeys as well. So Yeon Ru (69 for the third straight day) and Marina Alex (71) are tied for fourth at 9 under, and Lydia Ko shot a bogey-free 68 on Saturday to move into a tie for sixth at 8 under with Brittany Lincicome (73).

First-round leader Amy Olson made three double-bogeys on her way to a 76, leaving her in a tie for 16th and 11 shots off Thompson’s lead.