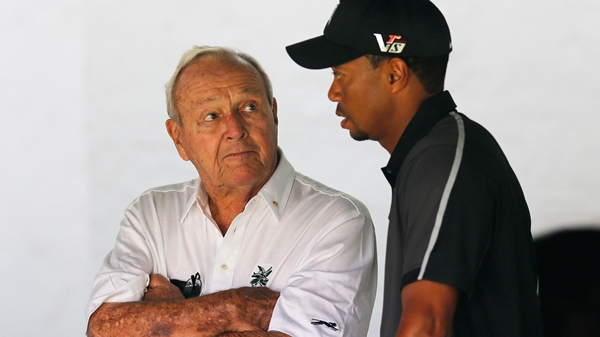 THOUSAND OAKS, Calif. – Tiger Woods said long ago he would give up golf when he felt he could play his best and still not win.

That includes his lifetime invitation to the Masters.

“Let me put it to you this way,” Woods said last week at his World Challenge. “I’m not going to beat Arnold’s record. I’m not playing that long, that’s for sure.”

Palmer set a record in 2004 by playing in his 50th consecutive Masters. Woods won his first green jacket when he was 21, and with reasonable health (a big assumption considering his injuries), he would seem to be in the best position to break that record. Even with his injuries, the Masters is the one major Woods has never missed.

He just doesn’t appear the least bit interested in that kind of a record.

“For me, I always want to win,” he said. “So if I can’t win, why tee it up? That’s just my own personal belief. And I know what it takes to prepare to win and what it takes to go out there and get the job done, and there’s going to become a point in time where I just can’t do it anymore. We all as athletes face that moment. I’m a ways from that moment in my sport, but when that day happens, I’ll make a decision and that’s it.”

But for Woods or any golfer, it’s tough to know when that day happens.

Palmer never won another PGA Tour event after the Bob Hope Classic in 1973, though he remained competitive for many years. Several players eligible for the Champions Tour are hesitant about moving on.

When is it time?

Might he change his mind about the Masters as he gets older? It doesn’t sound like it.

“Mellowing on that? No. I’ll be on that first tee starting out the event, I’m sure,” he said with a smile and a dose of sarcasm. “So I mean, you hit a good drive and you can’t get to where you can see the flag? I don’t know why it’s even fun.”

STENSON AWARD: Henrik Stenson has won the Golf Writers Trophy from the Association of Golf Writers, awarded to the top golfer who was born or lives in Europe, along with European teams. Stenson became the first player this year to win the FedEx Cup on the PGA Tour and the Race to Dubai on the European Tour.

Nearly two-thirds of the AGW members made Stenson their first choice on a ballot that included U.S. Open champion Justin Rose and Europe’s Solheim Cup team that won on American soil for the first time.

Stenson was the first Swedish male to win the award. Annika Sorenstam won the award twice.

“I’m looking forward to getting a few of these trophies I’ve won into the summer house in Sweden,” said Stenson, who primarily lives at Lake Nona in Orlando, Fla. “It has been such a great year that I can have a few in Europe and a few in my house in America. What a great thrill it is going to be over Christmas to sit by the fire with my family and take stock of the season, look at trophies such as this one and reflect on the year of my life.”

IN THE BAG: Jack Nicklaus won’t have a bouquet of head covers in his bag when he plays the PNC Father-Son Challenge this weekend, though the 14 clubs in his bag have changed from his prime.

Nicklaus said when he played on the PGA Tour he carried a driver and a 3-wood, a 1-iron through a 9-iron, pitching wedge, sand wedge and putter.

No other player hit more memorable shots with a 1-iron than Nicklaus, a club that featured in three of his majors _ the 1972 U.S. Open at Pebble Beach, the 1975 Masters and the 1967 U.S. Open at Baltusrol.

But there were times when he benched the 1-iron.

“I used to even go to Augusta when I carried a 1-iron a lot, and sometimes I’d put in maybe a 4- or 5-wood, simply because you needed some elevation to stop it on the greens and some of the lies you played,” Nicklaus said.

THE HANEY SHOW: Hank Haney has gone from writing a book on his years with Tiger Woods to hosting his own radio show on SiriusXM.

The radio network continues to beef up its programming. It already has shows for Henrik Stenson and Ian Poulter, along with two-time Masters champion, architect and golf savant Ben Crenshaw. Haney will host “Hank Haney Golf Radio,” an instructional-based show that will air Saturday and Sunday at 10 a.m. ET starting on Jan. 3.

The program will be geared around Haney’s teaching philosophy, and he will take calls from listeners who want help with their games. Haney also will offer his analysis on today’s players and take on current topics, which are sure to include Woods.

“This show will be truly interactive and I’m eager to speak with golfers across the country,” Haney said.

TWEETING TIGER: Jason Dufner jokingly tweeted to Tiger Woods that the schedule of the World Challenge be changed so Dufner could watch Auburn in the SEC title game last week. Woods replied on Twitter, “Petition denied.”

It was a significant only because it was Woods’ first tweet in more than a month. It was his 35th tweet in the span of a year, most of them commercially related. And that Dufner tweet was the first of – get this – FIVE tweets in two days.

“I grew up in a different era, and it’s a little bit different for me,” Woods said, who is 9 years older than the downhill ski champion. “I’m still a little bit old-school. I’m kind of getting it, but still not grasping the whole concept yet. But I’ll get there eventually.”

DIVOTS: K.J. Choi donated his $100,000 from the World Cup to help with relief efforts in the Philippines. “I wanted to represent Korea in sharing the sentiment of my fellow countrymen to our friends in the Philippines,” Choi said. “I send my deepest condolences to the people of the Philippines who have lost their families and homes. The donation from the KJ Choi Foundation was sent to the American Red Cross. … Redstone Golf Club is now called ”Golf Club of Houston“ under a contractual requirement when it changed ownership. It still is host of the Shell Houston Open, the final PGA Tour event before the Masters. … Cal coach Steve Desimone has been selected U.S. captain of the Palmer Cup next year. The Palmer Cup, matches between college players from the United States and Europe, will be June 26-28 at Walton Heath.

STAT OF THE WEEK: The 19 tournaments Tiger Woods played this year offered an average of 72.7 world ranking points to the winner.