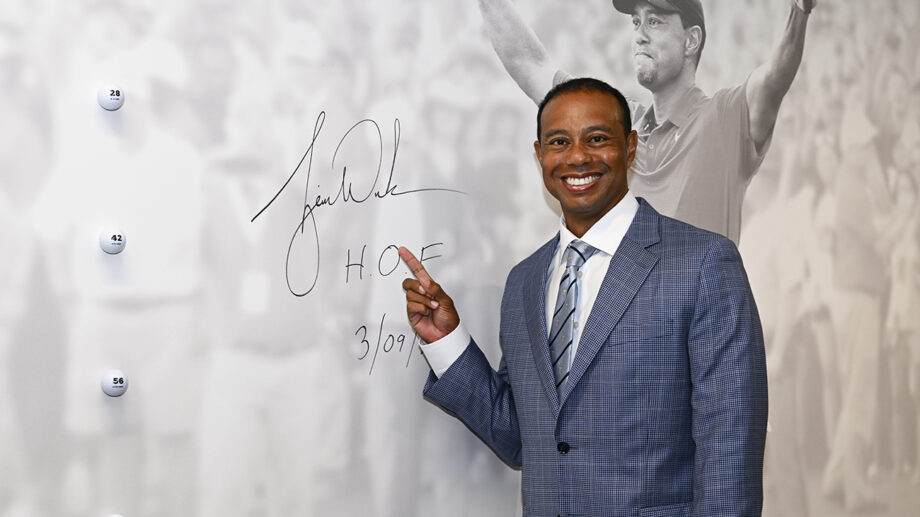 Tiger Woods spoke for 15 minutes or so, nearly all of it devoted to his parents and everyone else who nourished his love of the game. Missing was even one mention of any of the mind-bending accomplishments that landed him at the World Golf Hall of Fame podium in the first place.

Just as telling, perhaps, Woods dropped no hints about what might come next.

It was an intensely personal speech, a portrait of the golf artist as a very young man. Woods recalled how, as an 8-year-old, he was dropped off at the local muni each morning, with plenty of time to take quarters off the older kids in putting contests and skins games, then spent hours looking for lost balls while waiting for his father, Earl, to get off work at 4 p.m. and pick him up in a golf cart.

“By then, especially in the wintertime, it was already dark,” Woods recalled. “So we had a rule, if you ever lost the golf ball, we’d be done, and we’d have to drive in.

“So part of understanding how to shape shots and knowing where I hit it on the face, where I would hit it, all started then. … The furthest I ever made was 17 holes in the dark,” he added, laughing. “Never quite got to 18.”

Woods did nearly every time it mattered after that, winning 15 major championships and a record-tying 82 on the PGA Tour, and who knows how many more he’d have added if not for the eight surgeries he endured along the way. Woods didn’t mention those, either. But 14-year-old Sam Woods, who introduced her father, did.

Referring to Woods’ February 2021 car crash in Los Angeles, she said, “We didn’t know if you’d come home with two legs or not. Now not only are you about to be inducted into the Hall of Fame, but you’re standing here on your own two feet.

Ten months later, Woods played with his 12-year-old son, Charlie in the PNC Championship, finishing second in the team event. Despite needing a cart to get around, Woods showed plenty of flashes of the mastery that made him nearly unbeatable for more than two decades. Inevitably, the questions began: Could he come back again?

Woods answered the latest round the same way he had in the past _ nothing was certain, but he wasn’t closing the door on at least a limited return. Then his caddie, Joe LaCava, threw some more kindling on the embers.

“I think it’s gonna be even more work than it was coming back from the fusion surgery with the back and stuff like that, but I think he’s willing, at this age, to do it,” LaCava said in an interview Wednesday with Sirius XM PGA Tour Radio.

“Maybe that father-son tournament gave him a little more motivation because, as most people saw — if they watched it — he hasn’t lost much. He may not be quite as long as he once was, but he can still hit the ball and still can putt and chip. So, I mean, if he can get around a golf course, he could still be dangerous, if that happens.”

Woods, as noted above, talked about the distant past and said nothing about his future. But golf is that rare game where Hall of Famers can collect their plaque, stick it in the trophy case and step back onto the field. Phil Mickelson and Ernie Els were both already alumni when they won in recent years.

Woods referred to those wins not long ago, calling his induction “an acknowledgement that you’ve had a successful career.

The best ones have the hardest time letting go. Woods wouldn’t be the first G.O.A.T. (Greatest of All-Time) to push the envelope.

“One day you might look up and see me playing the game at 50,” is how Michael Jordan ended his Hall of Fame induction speech. Knowing laughs erupted on every side of him.

Woods can’t walk a golf course at the moment, so he eschewed empty boasts or self-deprecating jokes, and it’s hard to imagine he would show up at the first tee just for the sake of playing. But Jordan and Jack Nicklaus and even Muhammad Ali said almost the same thing and all of them came back in search of one more transcendent run, one more moment when they felt like the king of the world.

“I was never going to be denied,” Woods said around mid-speech Wednesday night, recalling the moment he’d inherited his father’s passion for the game. “I loved it. I had this burning desire to be able to express myself in this game of golf.”

A plaque isn’t going to change that.

Additionally, the World Golf Hall of Fame presented two new distinguished service awards for the first time. Renee Powell was honored as the inaugural recipient of the Charlie Sifford Award presented by Southern Company (for her spirit in advancing diversity in golf), while Peter Ueberroth and the late Dick Ferris were honored through a Lifetime Achievement recognition for their contributions to golf.