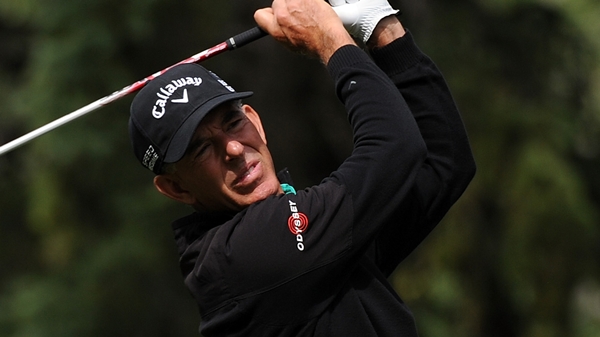 QUEBEC CITY – Defending champion Esteban Toledo shot a 6-under 66 on Saturday for a share of the second-round lead with Brad Faxon in the Champions Tour’s Quebec Championship.

The 51-year-old Toledo, the only Mexican winner in the history of the 50-and-over tour, matched Faxon at 10-under 134 at La Tempete in the first PGA Tour-sanctioned event in the area since 1956. Toledo won the then-Montreal Championship last year at La Vallee du Richelieu for his second Champions Tour victory.

“I went out there on the golf course today and enjoyed myself,” Toledo said. “That’s pretty much what I did. … I hit it great. Hit a lot of fairways, hit a lot of greens, I putted well and it seems like when I putt well, I get a lot of confidence.”

Faxon, also a two-time senior winner, had a 67.

“It was a good solid round of golf today,” said Faxon, an eight-time winner on the PGA Tour. “I laughed at myself because I started thinking about how my rounds are usually miss the fairway, miss the green, chip it up, make a par, and this was on the fairway, on the green, make a putt and it was a nice round.

“Then when I started thinking about that, I hit a bad shot on 16 and made a bogey and then three-putted 17. But the birdie on 18 was a great birdie to make finishing in the dark, in the cold.”

Loren Roberts was third at 8 under after a 69. Jay Haas, Scott Simpson, Wes Short Jr. and Duffy Waldorf were 7 under. Simpson and Short shot 68, Haas had a 69, and Waldorf a 71.

Two-time U.S. Open champion Lee Janzen, making his Champions Tour debut, was tied for seventh at 6 under after a 67. He turned 50 last week.

First-round leader Chip Beck followed his opening 65 with a 75 to drop into a tie for 23rd at 4 under.

Jim Rutledge leads the Canadians at 4-under 140. He’s tied for 23rd heading into the final round.
Partner message