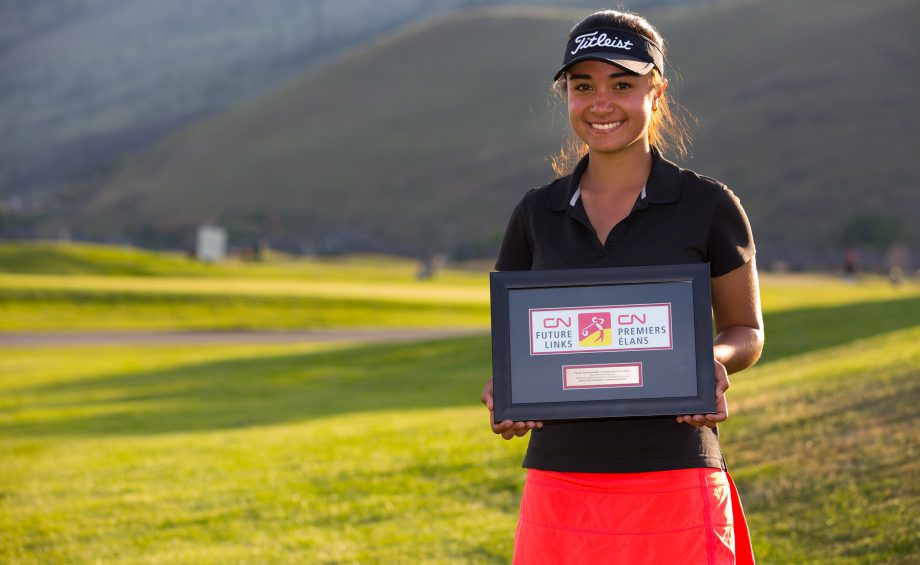 KAMLOOPS, B.C. – The final round of the 2016 CN Future Links Pacific Championship at The Dunes at Kamloops Golf Club unfolded in much the same way as the previous two – with the Junior Boys and Junior Girls fields in pursuit of Tony Gil and Mary Parsons. Neither would be caught as the pair completed wire-to-wire victories to open Golf Canada’s championship season.

Team Canada Men’s Development Squad member Tony Gil matched his opening-round 66 with another six-birdie performance. “I managed myself really well, strategically and mentally,” said the product of Vaughan, Ont. “Tee to green, I was really solid. I made a couple of long putts for birdie. Overall this week, my ball-striking was on point. I only made two bogeys which was quite nice. I’m pretty happy with how I played.”

The significance of the victory was not lost upon Gil. “This is my last CN Future Links event, so it means a lot to cap it off with a win. This was a huge confidence booster. To know that I’m shooting that low – this experience will be really useful for the World Junior coming up.” The Toyota Junior Golf World Cup will take place at Chukyo Golf Club in Toyota, Japan from June 11-17.

The 18-year-old Gil finished 16-under 200 – 10-strokes clear of Conaire Kehoe of Calgary, who tallied five birdies to match the 69 he posted on the first day. Two Calgarians finished tied for third at 5-under: Brendan MacDougall, who carded a 68, and Development Squad member Alexander Smith, who made four birdies, including three across a bogey-free back nine.

When asked about her play throughout the tournament, Mary Parsons credited her preparedness for the victory. “I felt I played pretty well. I stuck to my game plan and didn’t try to change anything out on the course.”

“I really wanted to start the (Golf Canada) season off strong because I’ve had a bunch of Top-5 finishes in the season openers,” added the 16-year-old when reflecting on the importance of the win. “I really wanted to make this one count because I want to make Team Canada this year. I just played my game and I just wanted to have a good showing this week.”

Entering the final round, Parsons from Delta, B.C., held a six-shot advantage over Team Canada Development Squad member Chloe Currie of Mississauga, Ont. Parsons finished with four birdies on the day to hold off Currie, who was unable to catch the leader despite a seven-birdie 3-under 69. Fellow National Team member Grace St-Germain surged up the leaderboard with a bogey-free 5-under performance to finish T3 alongside British Columbians Sumie Francois of Burnaby and Amanda Minni of Delta.

All competitors within the Top-6 in the Junior Girls division have earned exemptions into the 2016 Canadian Junior Girls Championship from August 2-5 at The Links at Penn Hills in Shubenacadie, N.S. Joining Parsons in playing their way into the national amateur championship were Currie, St-Germain, Francois, Minni and Courtenay, B.C., native Abigail Rigsby.

Additional information regarding the 2016 CN Future Links Pacific Championship can be found here.