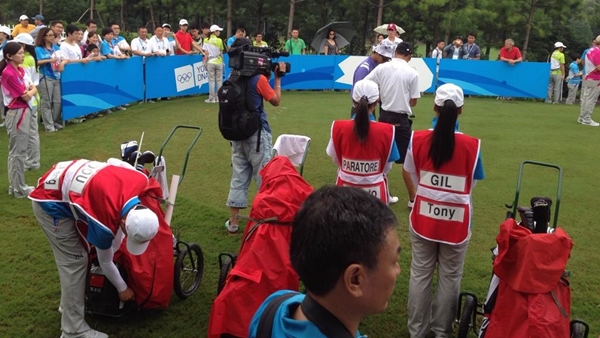 Gil, a native of Vaughan, Ont., made his first round one for the ages as he fired a hole-in-one on the par-3 3rd. The ace marks the first time in Olympic history.

“I had to carry the ball 164 yards to the pin, and chose a smooth swing with my 7-iron,” said Gil of the hole-in-one, also the first of his career. “I couldn’t actually tell it went in from the tee,” he said with a laugh.

The Team Canada Development Squad member closed out the front nine with a 1-under 35, crediting his ability to get out of trouble with up-and-downs. The 16-year-old went on to card three birdies on the back, leaving him at 3-under for the day in a tie for fifth.

On the girls side, Maddie Szeryk, 18, posted a 2-over par 74, leaving her in a tie for 16th, five strokes back of the leaders. In addition to competition, the 2013 Canadian Junior Girls Champion is really enjoying the atmosphere with golf back in the Olympics.

“It’s awesome that it’s finally back in the Olympics and it’s so great to be here,” said Szeryk. “I’m hoping to play better in the next few days but overall the experience has been amazing.”

Team coach, Robert Ratcliffe, is very pleased with the performance so far and will make some slight adjustments to the strategy going forward.

“I want to change a bit of the strategy in regards to course management in the next few days,” said Ratcliffe, also Team Canada’s Lead Development Squad coach. “We are playing some of the highest ranked players in the world here and I think we are in good position to gain on the leaders.”