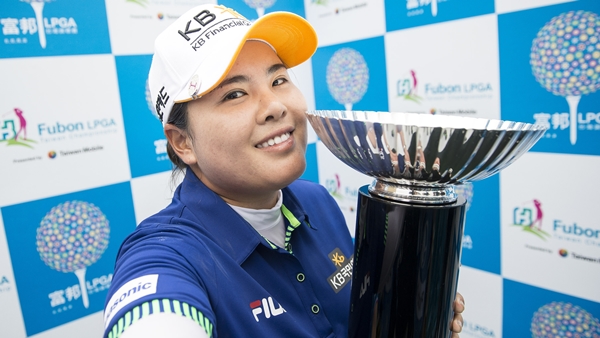 TAIPEI, Taiwan – Six days after taking the No. 1 spot in the world from Stacy Lewis, Inbee Park was a notch above the American again at Miramar.

Park won the LPGA Taiwan Championship on Sunday for her third victory of the year and 12th tour title, holding off Lewis by two strokes.

The 26-year-old South Korean player closed with a 1-under 71 in light rain to finish at 22-under 266. The victory capped a hectic Asian trip centered around her marriage last month to swing coach Gi Hyeob-nam.

“I think this will be my wedding gift for myself,” Park said. “It’s a good feeling and maybe people who said, `She’s not going to play as well as when she was not married.’ I think we can put that wrong.”

Park shot 64-62-69 to take a four-stroke lead over Lewis and China’s Shanshan Feng into the final round.

“I think playing with Stacy, I really wanted to play well,” Park said. “Obviously, being able to win the tournament was a great accomplishment. It was a tough day and I got nervous on every hole today, even on the 18th hole.”

The second-ranked Lewis, also a three-time winner this year, shot 69.

“I hung in there all day and just made Inbee work for it,” Lewis said. “That was the goal. You give Inbee four shots, it’s a tough task to overcome. She hit the shots when she needed to coming in.”

“I don’t think this is the last time we’ll be battling at the end of a tournament,” Lewis said. “I think we’re both playing some really good golf right now. It’s unfortunate, I guess, for the fans it’s the end of the season, but we have a few tournaments left and hopefully we’ll do it again.”

Park won the LPGA Manulife Financial in June in Canada and took the LPGA Championship in August for her fifth major title. Last year, she swept the first three majors and won six times.

Third-ranked Lydia Ko was third at 17 under after a 66, the best score Sunday. The 17-year-old New Zealander won the Swinging Skirts World Ladies Masters in December at Miramar.

“I think I played really well here in Asia,” Ko said. “I’ve enjoyed it and I’m excited for a week off next week.”

Michelle Wie had weekend rounds of 72-72 to tie for 20th at 6 under in a group that included Norway’s Suzann Pettersen and Taiwan’s Yani Tseng. Pettersen, the winner the last two years at Sunrise, finished with a 71. Tseng, the winner of the inaugural event in 2011, shot 70. She won the last of her 15 LPGA Tour titles in March 2012.