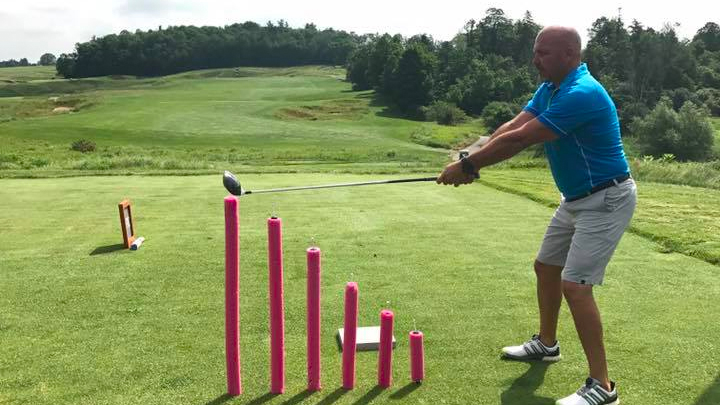 Almost four years ago Todd Keirstead did a golf instructional demonstration at a veteran’s hospital when he came to an important realization.

The trick shots he had been performing for a few years – building up a brand so well known that Golf Channel named one of his shots as the No. 1 trick shot in 2014 – actually were emulating the injured service men and women he was doing the demonstration for.

Instead of being just pure entertainment, Keirstead – who most recently was the golf competition supervisor at the 2017 Invictus Games in Toronto – realized he could be more inspirational and inspiring.

Starting Saturday and running through the end of September Keirstead will be performing for United States Air Force members and their families in a new ‘Recharge for Resiliency’ initiative.

The program began in 2015 as a new tool to encourage service members and their families who are affected by deployments to participate in morale, welfare, and recreation programs and activities.

LPGA Tour golfers like Amy Read participated in instructional clinics in 2017 and Keirstead will be travelling across the United States and into Europe and Japan performing for hundreds of servicemen and women in the Recharge for Resiliency Golf Days.

“It’s my way of saying ‘thank you’ for everything they do – not only the individuals that are serving but also their family members and all the sacrifices they’ve made,” says Keirstead by phone as he prepares for the first event of the year in Dover, Delaware on June 30th.

Keirstead says he’ll be performing for an hour, and at one of the sites in Colorado Springs he’ll also be doing a 30-minute motivational talk.

It will be entertainment, he says, but for the past number of years Keirstead, who is able-bodied, has shown that people who may be in a wheelchair or may be blind can still play golf. The shots he hits (he’ll put on a prosthetic limb or a blindfold, for example) are entertaining for some, but inspiring for many others.

“The last 10 minutes of the show I’ll be explaining to them how the military has changed my life and how I’m taking the entertainment show and turning it into a motivation/inspiration show,” he says. “A lot of the shots I hit are emulating the wounded veterans situations.”

The trick shots, he admits, are not really tricks. By making sure he has all the correct fundamentals down, he’s able to hit any shot the way he does. But because it’s so unique, he’s sure the audience will leave with a smile on their face after a break from their every-day military lives.

Keirstead’s new role with the USAF is part of a grander program he has called Bring Back the Game, an initiative supported by adidas golf and TaylorMade in Canada. The Bring Back the Game clinics, Keirstead says, are helping people to overcome their barriers and show golf as a tool to help build confidence and self-esteem.

He says he’s “very fortunate” to be asked to give back to the U.S. military using this platform, and he’s hopeful it will expand the message that golf is a sport for all people regardless of age, physical or mental ability.

“These shots that I’m doing for pure entertainment are actually motivating and inspiring for these troops,” he says. “It’s showing they can play golf in an adaptive way.”