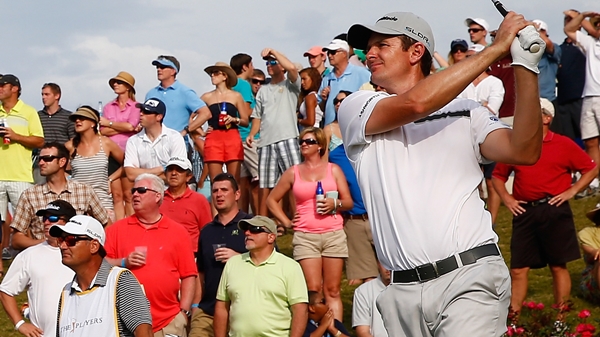 PONTE VEDRA BEACH, Fla. – The PGA Tour has rescinded the two-shot penalty given to Justin Rose at The Players Championship.

Rose was penalized Saturday evening after the third round when he addressed a chip shot off the 18th green and it was deemed his ball moved ever so slightly. Rose didn’t think it did and played the shot. It took viewing of three television shots for the tour to assess the penalty under Rule 18-2b.

An hour before his 12:35 p.m. EST tee time, the tour rescinded the penalty.

The third-round score became a 71, and Rose teed off only five shots behind the leaders.

The penalty was lifted under Rule 18-4, which limits how players can be penalized based on video evidence from HD cameras. Rose was informed of the decision about an hour before his

“I was good with the way everything played out; I want to play by the rules,” Rose told PGATOUR.COM before teeing off in the final round. “But I was reading an article in the evening and the rule states — and I’m paraphrasing — but if a player can’t discern whether the ball moved or not, it’s deemed not to have moved. I sort of scratched my head and said that’s exactly what happened to me and yet I was docked two.

“But obviously all the governing bodies all got together overnight to talk about it.”

Instead of a 73 in the third round Rose was credited with a 71 and enters the final round at TPC Sawgrass five shots back of the lead.

“It was thought that Decision 18-4 was not applicable because the review of the footage shown in the telecast showed that the ball may have moved in a way that was discernable to the naked eye and when viewing the incident with Rose in the television compound, it was confirmed that the ball did in fact move very slightly,” the PGA Tour said in a statement. “Thus, at the time, the Rules Committee deemed that the ball had moved in a manner that was reasonably discernable to the naked eye. The Committee, therefore, assessed the general penalty under Rule 18 of two strokes.

“Overnight, given the fact that Decision 18-4 had been implemented in January of 2014, yet had not been utilized in PGA Tour competition, the Rules Committee reopened the incident and focused on how much the use of sophisticated technology played a part in making the original ruling. After that review, it was determined that the only way to confirm whether and how much the ball had in fact changed position, was to utilize sophisticated technology.

“This morning, after consulting with the governing bodies and PGA Tour Commissioner Tim Finchem, it was determined that without the use of sophisticated technology, it was not reasonably discernable to the naked eye that the ball had left its original position and had come to rest in its original place.”