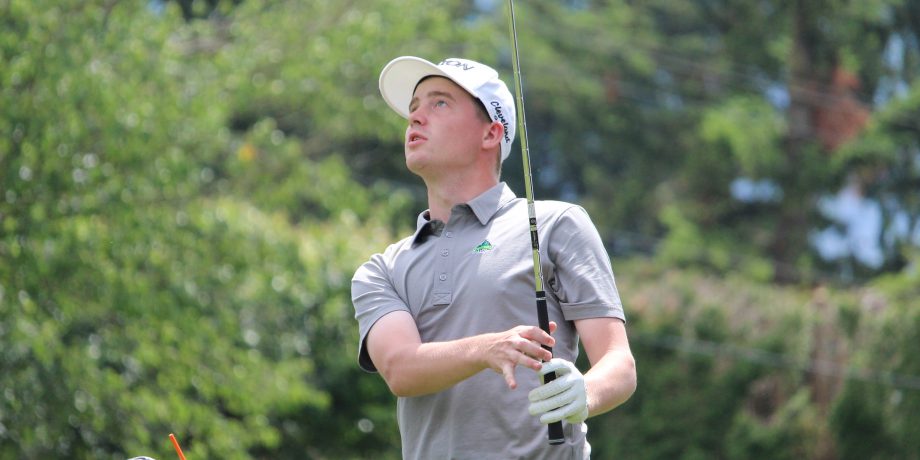 CHILLIWACK, B.C. – The University of the Fraser Valley Cascades and the University of British Columbia Thunderbirds remained atop the leaderboard in the men’s and women’s team divisions, respectively, after the second round of the Canadian University/College Championships at Chilliwack Golf Club.

Everyone kept their eyes peeled on the host team as the Cascades continued to dominate the men’s team competition. They sit in top position with a substantial 12-shot lead at 21-under-par 555, in large part thanks to top-three finishes by three of their golfers – Zach Olson, Daniel Campbell and Halen Davis. The UBC Thunderbirds posted the lowest team score of the day, sitting in second with a combined score of 9-under-par 567. The third spot belongs to the University of Victoria Vikes, who earned a team total of 3-under-par 573.

In the individual men’s category, the Cascades’ own Olson entered the day in a three-way tie for first and never looked back.

“I went out with the same game plan”said Olson. “I kept the ball in play and hit a lot of fairways and greens today, so it was steady.”

The Strathmore, Alta. talent ending the second round sitting in solo-first at 7-under-par 137, one stroke ahead of teammate Daniel Campbell who moved up two spots to second. Davis, also of the Cascades, shares the T3 spot with Baptiste Mory of the Université Laval Rouge et Or and UBC’s Andrew Harrison at 5-under-par 139.

The low-score of the day goes to Vikes player Lawren Rowe, who carded a 7-under 65 for an overall 140.

In the women’s division, the Thunderbirds continue their historic lead with an overall team score of 13-over-par 445. The Université de Montréal Carabins are second, 8 strokes behind at 21-over-par 453 while the University of Victoria Vikes sit in third at 26-over-par 458.

Thunderbirds golfer Avril Li began the day sharing the lead with fellow teammate Kelly Hellman. Though a double bogey on her second hole threatened her lead, Li managed to stay ahead card a 1 under to end the second round in solo-first with a comfortable 5-stroke lead.

“Overall it was a pretty consistent round, pretty similar to yesterday,” said Li. “I had one bad hole on number 2 but I didn’t let that bother me just stuck to my game plan.”

The women’s and men’s individual winners receive an exemption into their respective Canadian Amateur Championship. The top three men’s and women’s individual finishers qualify for the 2019 Summer Universiade.