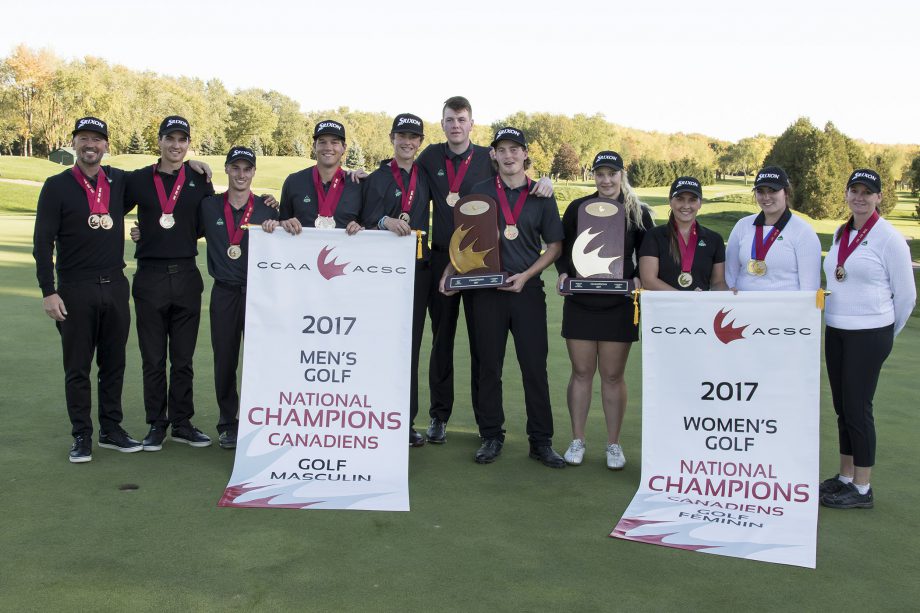 “It’s pretty exciting (having the team win gold alongside him),” said Campbell. “It’s a good group of guys. They’re fun to play with on and off the golf course. They keep it light and it’s always fun playing with them.”

Charles-Eric Bélanger of Champlain St. Lawrence rounded out the podium ending up one stroke behind Casorso. Bélanger edged out Thomas Code of Fanshawe and Zach Olson of UFV who were named championship all-stars.

For the first time in CCAA history, the women’s individual title came down to a playoff as Sarah-Eve Rheaume of the Champlain St. Lawrence Lions and Madison Kapchinsky of UFV were tied at 23-over after four rounds. On the playoff hole, Rheaume’s downhill putt from about 30 yards out would set her up for a short putt for par to win the title as Kapchinsky would record a bogey after having her drive go into the sand.

Addison Wallwin of the Georgian Grizzlies, the defending CCAA individual champion, won the bronze medal finishing 14 strokes back of the leaders and three strokes ahead of Shaye Leidenius of Red Deer.

For both UFV teams, it was their second team title in program history with the other two coming in 2013.

Winning the team gold and an individual silver medal, Kapchinsky will overjoyed with her championship experience.

“Our team performance was everything we could ever ask for,” said Kapchinsky. “It’s my first national championship. I think we all played great and am proud of all three of us.”

The host Durham Lords moved up one spot and finished in sixth place overall in the team standings. Josh Taylor would crack the top 20, shooting four-over on Friday and ending up at 23-over for the tournament.

Through the championship the field recorded 450 birdies, or 450 pounds of food that will be donated to the Salvation Army.